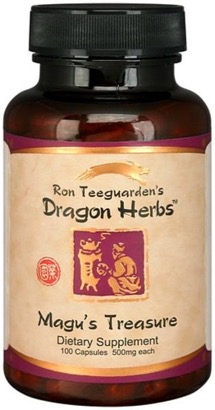 A combination of nothing less than the very finest tonic herbs available in the world, specifically designed as the ultimate woman's tonic.
$52.25
Out of stock

The Herb's in Magu's Treasure

Pearl has a tremendous reputation in China as both a beauty tonic and as a Shen tonic. Recent Chinese medical texts credit pearl with the ability to clarify the skin, to maintain normal healthy muscle development and to invigorate healthy blood circulation.

As a beauty tonic, pearl is hard to beat. The components in pearl powder help heal typical minor blemishes and maintain the health of the skin by participating in the metabolic activities of the skin. Pearl promotes the regeneration of new cells and makes the skin smooth, fine, elastic and naturally beautiful.

High quality pearl powder can promote the activities of the important natural antioxidant enzyme known as SOD, and can help prevent the development of melanin, which causes freckles and dark patches on the skin during normal aging. It can help prevent the skin from becoming old looking, wrinkled and sagging. This is partly due to its stimulation of sod activity and partly due to other capacities and nutrients. Consistent use of pearl powder can eliminate blemishes such as colored spots and even pimples (not to be used for severe acne). Constant use can help assure that the skin will age more slowly. Pearl is one of the great secrets of the most beautiful women of the Orient.

Pearl is also a powerful Shen stabilizer. It is among the elite substances of this type known. It can relieve typical uneasiness, nervousness, and tension. Pearl contains dozens of minerals, including: calcium, magnesium, zinc, iron, strontium, copper, selenium, silicon, titanium, and more. But to many people's surprise, pearl is not just made up of minerals. Pearl contains many amino acids (eight of the amino acids are "essential" – in other words, they cannot be produced in the body but are required for health). Various components in Pearl participate in DNA and RNA metabolic activities, and thus can promote and accelerate cell renewal. Mucopolysaccharides in Pearl have been shown to prevent wrinkling and to increase libido and sexual function in humans.

Fresh water pearls have been ground "nano-fine" for complete absorption and easy utilization by the body.

Deer Antler extract contains hyaluronic acid, a natural substance, also produced in the human body, that maintains elasticity of the skin and connective tissue. Deer Antler is also well known as a sexual tonic for women. It is a Yang tonic that helps restore sexual vigor and performance for decreased sexual function associated with aging.

Royal Jelly is a natural substance produced by worker bees for their queen. This incredibly nutritious substance is rich in a very broad spectrum of important vitamins, minerals and other components essential to radiant health. Royal Jelly is believed to be an important beauty aid and is said to beautify the skin, eyes and hair.

White Peony root is one of the most highly prized women's herbs used to promote beauty. An old Chinese saying states that "a woman who consumes Peony root will become as beautiful as the Peony flower itself."

Longan is a wonderful and delicious tonic fruit used as a superior blood tonic, and to add luster and beauty to the skin. It is believed among Chinese women that Longan is not only a great tonic for the skin, but is also a fantastic sex tonic. For that reason, Longan is considered as a special tonic for women who wish to be both beautiful and sexually active — it has a 2000 year reputation as a love tonic. It is said that the most beautiful woman in the history of China, Yang Kuei Fei consumed Longan every day. It is believed to have a calming effect and to add radiance to the eyes.

Schizandra is a famous tonic historically consumed by female Chinese royalty and by Taoist yoginis. It is one of the few herbs that contains all three Treasures. Schizandra is renowned as a beauty tonic and is considered to be a youth-preserving herb. It has been used for centuries to support soft, moist and radiant skin. It is also an excellent sexual tonic when consumed regularly. It is said to help produce abundant sexual fluids, increase sexual endurance and to strengthen the whole body.Women who practiced Taoist lovemaking practices for the purpose of retaining the youth and beauty all consumed Schizandra daily.

Schizandra is said to increase the Water Qi in the Kidney. In particular, it is said to vastly increase the "water of the genital organs," referring to the sexual fluids. It is famous for its ability to relieve sexual fatigue. Schizandra is also said to increase circulation in and sensitivity of the female genitals. Many women claim increased genital warmth and sensation after using Schizandra for a period of time. The Chinese sexual classics claim that continuous use by a woman will increase the amount of "female elixir," a euphemism for vaginal secretions, during intercourse. Schizandra is considered to have "aphrodisiac" qualities, especially when combined with other Kidney tonics. Furthermore, Schizandra is one of the most important astringent herbs used in Chinese herbalism. An astringent herb conserves fluids, and in the case of Schizandra, it tends to contain sexual fluids until the appropriate time of release. Thus, consuming Schizandra for a period of time, one tends to build up sexual fluids.

Schizandra is widely used to beautify the skin. Due to the astringent quality of Schizandra, the skin tends to hold its moisture and becomes full and beautiful. It has always been very popular with the wealthy m women of China because of its youth preserving and rejuvenating effects.

Dang Gui (Angelica sinensis) is used as a superb blood tonic. It is also an important blood-vitalizing herb (e.g., it improves blood circulation). Dang Gui is most famous as a women's tonic, because women so often use it as a blood tonic and to support the female menstrual cycle in healthy women.

This delicious tonic fruit is very widely used as an excellent Yin Jing and blood tonic. Regular consumption of Goji is traditionally believed support cheerfulness and vitality. Goji is also said to brighten the eyes. It is a very great woman's herb.

Codonopsis is one of the most widely used Chinese tonic herbs. It is very mild and without any side effects, yet it is a powerful Qi tonic. It invigorates the Spleen and Lung functions so that Qi is replenished and it supports the production of body fluids. Codonopsis is also an excellent blood tonic. Its blood building quality makes it especially good for women, because women naturally lose blood monthly during menstruation.

Cynomorium is considered to be a superb tonic to the primal Yang essence and is thus used as a Yang tonic by women. It provides excellent sexual support – it is a tonic and stimulant. Many women feel that it is an aphrodisiac.

Who can use it? Any woman who wishes to achieve radiant health and who wishes to maximize their physical beauty, the complete female formula