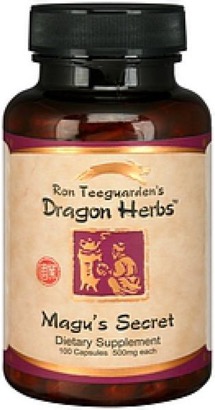 Magu's Secret is a combination of wonderful and famous tonic herbs traditionally used by the beautiful women of the Orient.
$20.90
Out of stock

The Herbs in Magu's Secret

White Peony root is an important blood tonic used to relax muscle and cleanse the blood. It is one of the most highly prized women's herbs used traditionally to help regulate the female hormonal cycle and to tonify and purify the blood. It is also used as a pain reducing agent and as an emotional stabilizer by women. It is said to help relieve cramps and spasms anywhere in the body. In particular, it is considered to be highly effective in relieving menstrual cramps. Peony root is also believed to extend life and to promote beauty. An old Chinese saying states that "a woman who consumes Peony root regularly becomes as beautiful as the Peony flower itself."

Longan is a wonderful and delicious tonic fruit used as a superior blood tonic, to nurture the heart, and to add luster and beauty to the skin. It is believed among Chinese women that Longan is not only a great tonic for the skin, but is also a fantastic sex tonic. For that reason, Longan is considered as a special tonic for women who wish to be both beautiful and sexually active --- it has a 2000 year reputation as a love tonic. It is said that the most beautiful woman in the history of China, Yang Kuei Fei consumed Longan every day. It is believed to have a calming effect and to add radiance to the eyes.

Schizandra is a famous tonic historically consumed by female Chinese royalty and by Taoist yoginis. It is one of the few herbs that contains all three Treasures. Schizandra is renowned as a beauty tonic and is considered to be a youth-preserving herb. It has been used for centuries to support soft, moist and radiant skin. It is also an excellent sexual tonic when consumed regularly. It is said to help produce abundant sexual fluids, increase sexual endurance and to strengthen the whole body.

Women who practiced Taoist lovemaking practices for the purpose of retaining the youth and beauty all consumed Schizandra daily.

Schizandra is said to increase the Water Qi in the Kidney. In particular, it is said to vastly increase the "water of the genital organs," referring to the sexual fluids. It is famous for its ability to relieve sexual fatigue. Schizandra is also said to increase circulation in and sensitivity of the female genitals. Many women claim increased genital warmth and sensation after using Schizandra for a period of time. The Chinese sexual classics claim that continuous use by a woman will increase the amount of "female elixir," a euphemism for vaginal secretions, during intercourse. Schizandra is considered to have "aphrodisiac" qualities, especially when combined with other Kidney tonics. Furthermore, Schizandra is one of the most important astringent herbs used in Chinese herbalism. An astringent herb conserves fluids, and in the case of Schizandra, it tends to contain sexual fluids until the appropriate time of release. Thus, consuming Schizandra for a period of time, one tends to build up sexual fluids.

Schizandra is widely used to beautify the skin. Due to the astringent quality of Schizandra, the skin tends to hold its moisture and becomes full and beautiful. It has always been very popular with the wealthy women of China because of its youth preserving and rejuvenating effects.

Dang Gui (Tang Kwei or Angelica sinensis) is used as a superb blood tonic. It is also an important blood-vitalizing herb (e.g., it improves blood circulation). Dang Gui is most famous as a women's tonic, because women so often use it as a blood tonic and to regulate the female menstrual cycle. It is found in most women's tonic preparations.

This delicious tonic fruit is very widely used as an excellent Yin Jing and blood tonic. Regular consumption of Lycium is traditionally believed to lead to a long and happy life. It is said that prolonged consumption of Lycium will promote cheerfulness and vitality. Lycium is also said to brighten the eyes and improve vision. It is said that Lycium strengthens the legs and enhances sexual function. Lycium fruit contains polysaccharides that have been demonstrated to strongly fortify the immune system. Lycium is also very rich in vitamin C and in B vitamins. Furthermore, it is the richest source of carotenoids, including beta carotene, of all known plants on earth and is thus a powerful antioxidant. It is a very great woman's herb.

Codonopsis is one of the most famous and widely used Chinese tonic herbs. It is very mild and without any side effects, yet it is a superb Qi tonic. It invigorates the Spleen and Lung functions so that Qi is replenished and it promotes the production of body fluids. Codonopsis is also an excellent blood tonic and a major immune system tonic. It is believed to have an action similar to that of Ginseng, but milder. Its blood building quality makes it especially good for people who are weakened due to illness, and by women, since women lose blood regularly. Codonopsis is extremely effective at relieving chronic fatigue. It is used in women's formulations to build blood. Since many women are slightly blood deficient, this is an important quality of the herbs that women should consume. Codonopsis is mild yet it has powerful strengthening effects, especially on the digestive, respiratory and immune systems. It is rich in immune stimulating polysaccharides that are beneficial to every one.

Cynomorium is considered to be a superb tonic to the primal Yang essence and is thus used in many tonics for both men and women. It is widely believed in the Orient to be a superb longevity herb and an excellent sexual tonic and stimulant. It is said to strengthen the bones. It is an especially excellent Yang tonic for women since it is also an anti-aging, moistening herb that fosters beautiful skin. Many women feel that it is a fabulous sex tonic (even an aphrodisiac).

Who can use it? This is a mildly Yin formula especially suitable for women who wish to build blood, purify and enrich the skin, and enhance beauty from within. Many men have used this formula and have found that it improves how they look and feel.