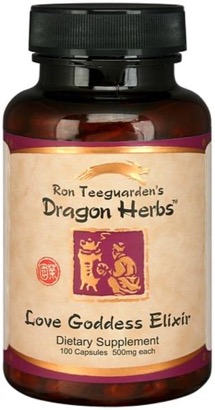 The ultimate tonic for unleashing your inner Love Goddess!
$42.75
Out of stock

This formula can support female sexual pleasure. It can also support the production of female sexual fluids. It has a gentle warm energy. All of the herbs in this formulation have traditionally been used by women who desired to increase feminine sexuality. These herbs were widely used by the women of the Imperial Palace and by women who practiced Taoist sexual arts.

All of the herbs are safe to use over an extended, if not indefinite period of time. Other formulations may be required to further balance the intricacies of the female system.

The Herbs in Love Goddess Elixir

Deer Antler is a Yang herb that is often associated with male sexual functionality. However, Deer Antler is very supportive for women when combined properly with herbs that balance the female system (as does this formulation). It supports healthy libido in women. Only the most active part of the Deer Antler is used in this product, the "tips" of Sika Deer, the the most prized Deer Antler in the world.

Polygala is one of the truly extraordinary tonic herbs in the entire Asian tonic herbal system. This herb first attained wide use in Taoist circles because it was believed to have powerful mind and spirit-supporting power. This root is traditionally used as a Shen tonic to relax the mind, and calm the spirit. Polygala has the ability to connect the Kidney (sexual) energy with the Heart (love) energy. It does this by opening the energy flow between the Heart and Kidney known as the Penetrating Vessel. The Penetrating Vessel is one of the energy channels that regulate the functions of the body-mind. It is called a "psychic channel" by the Taoists. Commonly, this vessel is blocked, resulting in a de-linking of our sexual energy and our emotional feelings. It is essential for our true health and well being that feelings of love and the functions of sex are united. Consuming Polygala for a period of time will support this result. Polygala thus has a unique power to deepen our experience and our feelings, and to bring new levels of happiness into our lives.

Longan is a wonderful and delicious tonic fruit used by the Chinese as a blood tonic and to add luster and beauty to the skin. It is believed among the Chinese people that Longan is not only a great tonic for the skin, but is also a fantastic sex tonic. For that reason, Longan is considered as a special tonic for women who wish to be both beautiful and sexual— it has a 2000 year reputation as a love tonic. It is said that the most beautiful woman in the history of China, Yang Kuei Fei ate Longan every day.

Dang Gui, or Angelica sinensis, is a blood tonic. It is also an important blood-vitalizing herb (e.g., it improves blood circulation). Dang Gui is most famous as a women's tonic, because women so often use it as a blood tonic and to help regulate the healthy female menstrual function. It is found in most women's tonic preparations.

Schizandra develops the primary energies of life, and generates vitality and radiant beauty when used regularly for some time. Schizandra is said to purify the blood, sharpen the mind, improve memory, rejuvenate the Kidney energy (especially the sexual functions in women), and cause the skin to become radiantly beautiful. The Taoists especially revered Schizandra. Schizandra contains all five elemental energies in abundance, contains all three Treasures in abundance, and enters all twelve meridians. Schizandra is said to increase the Water Qi in the Kidney. Schizandra is also said to increase circulation and sensitivity of the female genitals. Many women claim increased genital warmth and sensation after using Schizandra for a period of time. The Chinese sexual classics claim that continuous use by a woman will increase the amount of "female elixir," a euphemism for vaginal secretions, during intercourse. Schizandra is considered to have "aphrodisiac" qualities, especially when combined with other Kidney tonics such as Deer Antler. Furthermore, Schizandra is one of the most important astringent herbs used in Chinese herbalism. An astringent herb conserves fluids, and in the case of Schizandra, it tends to support the containment of sexual fluids until the appropriate time of release. Thus, consuming Schizandra for a period of time, one tends to build up sexual fluids.

Morinda is also a Yang herb. It is mild but powerful. It is traditionally known as the "Strength Builder." It tonifies Kidney Yang and has an excellent effect on female libido.

Peony root is an important blood tonic used to relax muscle. It is one of the most highly prized women's herbs used traditionally to help support a healthy menstrual cycle and to tonify and purify the blood. Peony root is also believed to promote beauty. An old Chinese saying states that "a woman who consumes Peony root regularly becomes as beautiful as the Peony flower itself."

Goji is a premier blood and Yin tonic that nurtures the female system. It supports female libido.