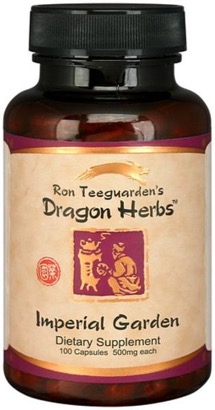 Imperial Garden is said to strengthen the legs and the back and is considered to be a "rejuvenation formula" by the Chinese.
$25.65
Out of stock

Imperial Garden is based on the time proven Return to Youth Formula, developed in the eleventh century and used continuously since that time. Imperial Garden is considered to be an "Imperial version" of Return to Youth because it contains a very powerful lead herb that was not generally available to common people at the time. That herb is Cordyceps, an herb of significant primal power. Cordyceps is both a deep Jing tonic that tonifies both Yin and Yang, and a superb Qi tonic that strengthens the Lungs.

Imperial Garden is one of the greatest of all tonic formulations, and is in particular a superb Yin and Yang Jing tonic. This formula influences primarily the Kidney function (both Yin and Yang). It is also considered to be a Heart, Liver and Spleen tonic. In addition, Imperial Garden is an excellent blood tonic. It is used to strengthen the entire body, and is especially respected as a brain tonic. It is also highly regarded as a long term sexual tonic for both men and women. Imperial Garden is used to strengthen the legs and the back. It is a major "rejuvenation formula". It may be used continuously and indefinitely as a primary Jing strengthening tonic.

Imperial Garden is used to help strengthen the sense organs, improve memory and the ability to concentrate, to overcome general weakness, chronic fatigue, to enhance male potency and female libido and fertility, and for premature aging and rapid degeneration. This superb essence (Jing) tonic is suited to men and women of all ages.

The Herbs in Imperial Garden

Cordyceps mushroom is one of the absolute superstars of the Chinese tonic herbal system. It is an extremely effective and powerful life-enhancing agent, ranking right up there with Ginseng, Reishi and Deer Antler. This rare and precious herb is considered to be a moderately Yang primal essence (Jing) tonic of the highest stature. It is a medicinal mushroom. It is said to help build sexual and to support physical power, mental energy and the immune system. Cordyceps is very widely used to support the primal Kidney functions, which include sexual functions, brain power and structural integrity. Cordyceps is also a major Lung tonic. It can be used to support respiratory power in those who require energy in order to perform physical work (e.g. labor, sports or exercise).

Goji berry and steamed rehmannia are two of the primary Jing tonic herbs used in Chinese tonic herbalism. They are both superb Yin Jing tonics that tonify the Kidney Yin. Goji berry is singularly the most popular tonic herb used throughout Asia. It restores Jing and helps build strong blood. It supports the metabolic functions and supports the immune system. It supports the eyes and vision, and has been shown to support other senses as well. It is renowned for its mood supporting effects. And it is one of the primary herbs used to strengthen sexual functions in both healthy aging men and healthy aging women.

Eucommia, cistanche and morinda are three of the finest Yang Jing tonics produced by Nature. They are the three truly elite vegetable-source Yang tonic herbs in the Chinese herbal system. Cistanche, Eucommia and Morinda tonify the Kidney Yang and with Achyranthes, invigorate sexual functions and strengthen the bones and ligaments, especially those of the back and knees. Dioscorea, Broussonetia and Schizandra further nourish the Kidney. Lycium, Schizandra, Achyranthes, Broussonetia, steamed Rehmannia and Cornus all strengthen the Liver and promote visual function.

Schizandra berry and cornus fruit are "astringents" to the Essence (Jing), locking the Kidney Qi in and preventing a leaking of essence. Schizandra, Cornus, Cistanche and Morinda are considered "aphrodisiac" in China, Schizandra acts as tonic to all of the organs, helping to support and regulate their functions, and supports the brain and supports concentration.

Polygala, steamed rehmannia and poria support the qi in the heart meridian. Schizandra, Poria, Zizyphus Seed and Polygala are all superb Shen tonics. Polygala opens the connecting channel between the Kidney and Heart, giving the organism a greater ability to process the emotions of love, passion, will, courage and fear.

Fennel, Poria and Dioscorea all tonify the Spleen and Stomach function. Dioscorea, Poria and Broussonetia support the circulation of fluids in the body. Jujube is a Spleen tonic which harmonizes the herbs so they function well together.

Who can use it? Those in generally good health who wish to maximize their life force