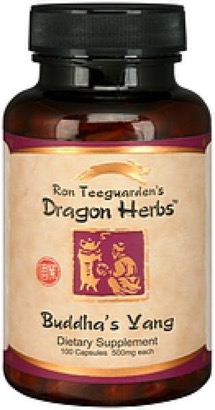 Buddha's Yang is a powerful vegetarian Yang Jing tonic formulation. Yang tonics are important antiaging formulations and they provide Yang energy that is exhausted by living.
$27.00 $25.65
Out of stock

The Herbs in Buddha's Yang

Chinese Cinnamon bark is a strong essence (Jing) tonic that promotes good circulation and powerful internal energy. It is sweet and spicy, and has a hot energy. Cinnamon bark is said to increase the Yang energy and sexual vitality. The best Cinnamon bark in the world comes from Southeast Asia from trees where the bark is, at its best, over twenty years old.

This herb is used to strengthen the yang energy, and is famous in China as a sexual tonic that was used by Chinese royalty and by Qi Gung practitioners. Cistanche builds deep strength and is quite revitalizing when used continuously for a period of time. It promotes healthy colon functioning. It is an excellent antiaging herb.

Eucommia is a superb Yang Jing tonic, used to strengthen the back (especially the lower back), skeleton, and joints (especially the knees and ankles). Eucommia is believed to confer strength and flexibility to the ligaments and tendons. It is often used by martial artists, yoga practitioners, Qi Gung practitioners, and other athletes to strengthen the back, knees, and the entire body. It has been found to be very helpful at regulating blood pressure, especially high blood pressure. Eucommia is widely used in China as a safe and effective sex tonic for men and women.

Morinda is an excellent Yang Jing tonic. It is considered to be highly nutritious and is used in superior tonic formulas for strengthening the body. It is widely used in primal Jing formulations, often as the main ingredient. Morinda is widely believed in China to increase mental power. It is also considered to be beneficial to the heart. Morinda is excellent for martial artists because it makes you strong.

The small fruit is a superb tonic to the primal Yang essence and is thus used in many tonics for both men and women. It is widely believed in the Orient to be a superb longevity herb and an excellent sexual tonic and stimulant. It is said to strengthen the bones.

This sour fruit plays an important role in many tonic formulations designed to build Jing. It is said to be "astringent," thereby locking energy into the system and preventing the energy from 'leaking" out. This is an important function to those practicing internal forms of Qi Gung. It is a powerful Yin Jing tonic. It has a warm energy and is often considered aphrodisiac when combined with the appropriate herbs.

Cuscuta seed is commonly used in long term tonic programs, often in combination with Cnidium seed. It is a gentle tonic for the Kidney Yin and Yang, and also helps nourish Qi. It helps the Kidney to consolidate the Qi . It is widely used to improve vision, nourish the sperm and marrow, strengthen bones and sinews and in particular to strengthen sexual functions.

Cynomorium is considered to be a superb tonic to the primal yang essence and is thus used in many tonics for both men and women. It is widely believed in the Orient to be a superb longevity herb and an excellent sexual tonic and stimulant. It is said to strengthen the bones. It is an excellent yang tonic for women.

Schizandra is a famous tonic historically consumed by Chinese royalty and by Taoist masters. It is one of the few herbs that contains all three treasures. Schizandra is renowned as a beauty tonic and is considered to be a youth preserving herb. It is also said to be a powerful tonic to the brain and mind, and is believed in China to improve memory. It is also said to be an excellent sexual tonic when consumed regularly. It is said to help produce abundant sexual fluids, increase sexual endurance and to strengthen the whole body. It is used in many tonic formulations as an "astringent." Schizandra has a wonderful multilayered flavor when processed properly. Schizandra develops the primary energies of life, and generates vitality and radiant beauty when used regularly for some time. Schizandra is said to increase the Water Qi in the Kidney. In particular, it is said to vastly increase the "water of the genital organs," referring to the sexual fluids. Schizandra is said to promote the production of semen. It is famous for its ability to relieve sexual fatigue and for increasing the sexual staying-power in men. Schizandra is also said to increase circulation in and sensitivity of the female genitals. Many women claim increased genital warmth and sensation after using Schizandra for a period of time. The Chinese sexual classics claim that continuous use by a woman will increase the amount of "female elixir," a euphemism for vaginal secretions, during intercourse. Schizandra is considered to have "aphrodisiac" qualities, especially when combined with other Kidney tonics. Furthermore, Schizandra is one of the most important astringent herbs used in Chinese herbalism. An astringent herb conserves fluids, and in the case of Schizandra, it tends to contain sexual fluids until the appropriate time of release. Thus, consuming Schizandra for a period of time, one tends to build up sexual fluids. Schizandra is used in sexual formulations to prevent premature ejaculation and to help promote endurance.

This supertonic fruit is very widely used as an excellent Yin Jing and blood tonic. Regular consumption of Lycium is traditionally believed to lead to a long and happy life. It is said that prolonged consumption of Lycium will promote cheerfulness and vitality. Lycium is also said to brighten the eyes and improve vision. It is said that Lycium strengthens the legs and enhances sexual function.

Prepared Aconite is a powerful Yang herb often used in China as a sexual tonic. It has a hot energy that magnifies the Yang tonic effects of all the other herbs in this formulation.

Usage: This formulation may be used as one's sole Yang Jing tonic, or it may be enhanced even further by the addition of Deer Antler, Cordyceps or Ant, all of which are available from Dragon Herbs in tincture form