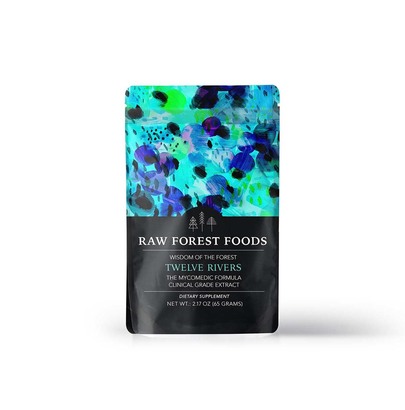 Named after the twelve energy (Qi) meridians of the body (as understood in Chinese medicine), the Twelve Rivers MycoMedic Formula was developed for those that want to gain the wide, far reaching benefits of medicinal mushrooms and fungi from a single, comprehensive product. Twelve Rivers MycoMedic is made using potent, clinical grade extracts, crafted into a comprehensive and substantial medicinal mushroom formula that celebrates and synergizes each of the included eight medicinal fungi.

This formula is intended to offer both short and long term benefits as a tonic adaptogenic formula and as an immune system potentiator (modulating and not merely stimulating).*

This formula has been professionally created by RAW Forest Foods. It is a proprietary formula, custom blended from the finest certified organic medicinal mushrooms and packaged in our FDA cGMP compliant facility, surrounded by pastoral, certified organic fields of medicinal herbs. Because our customers deserve the best.

An Overview of the Formula

Among all the organisms on this planet, some of the most fascinating ones are the mushrooms and other fungi. Fungi are neither plants nor animals, sharing characteristics of both, yet having many novel characteristics not present in either plant nor animal. Mushrooms have developed stunning abilities of biochemical synthesis, being able to create and 'manufacture' a wide variety of substances serving a multitude of purposes—many of which are just being discovered, with powerful potential to positively effect human health.Twelve Rivers MycoMedic blends eight different medicinal mushrooms, all of which have proven benefits, combining and amplifying their single effects to provide new benefits and advantages. The formula has been carefully and professionally crafted in order to provide long lasting benefits, most of all the immune system, and act as a powerful adaptogen to holistically improve wellness.*Twelve Rivers contains professional grade, standardized extracts (UV tested to contain 30% polysaccharides) of:•Chaga (Inonotus obliquus);•Cordyceps (Cordyceps sinensis);•Fu Ling (Poria cocos);•Hen-of-the-Woods, aka Maitake (Grifola frondosa);•Reishi (Ganoderma lucidum);•Royal Sun Agaricus (Agaricus blazei murill);•Turkey Tail (Trametes versicolor);•Willow Bracket (Phellinus igniarius).

Twelve Rivers MycoMedic uses only certified organic cultivated or ecologically wild crafted mushrooms and fungi.The mushrooms contained within our now product have each been individually described and noted for their beneficial health effects, in traditional medicine as well as modern science.