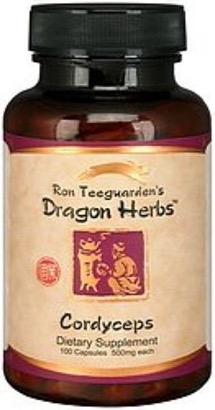 Cordyceps sinensis is one of the most popular and widely respected herbs in the world.
$36.00
Out of stock

Cordyceps is a mushroom that has been used for thousands of years as a profound tonic herb. It is used to strengthen the body and mind at a fundamental level. An herbal classic states that Cordyceps is able to increase the "primary motive force for life activities." Cordyceps replenishes Jing, both Yin and Yang. It is an excellent Yin Jing restorative, restoring the deep energy expended as a result of excessive exertion, adaptation to stress or from aging. Cordyceps is thus one of the primary herbal substances used in tonic herbalism as an anti-aging agent and for the purposes of rejuvenation.

Cordyceps is very widely used for the purposes of strengthening the primal Kidney functions, which include sexual functions, brain power and structural integrity. It is a potent Yin Jing tonic, but it is also a very powerful Yang tonic. Yang Jing is the energy of "power" in the human body. Yang energy promotes physical power at many levels. For example, as a sexual tonic, Cordyceps is considered to be one of the best. Consistent use of Cordyceps helps to strengthen the physical structure. It has been reported that world class athletes include Cordyceps in their diet as a super-nutrient.

Cordyceps is also a major Lung tonic. It can be used to strengthen respiratory power in those who require extra energy in order to perform physical work (e.g. labor, sports or exercise). Those who hike and engage in extreme endurance activities often find Cordyceps to be of great value.

Cordyceps has always been used to fortify the defensive system of the body and large amounts of recent data indicate that Cordyceps is a very potent immune system potentiator. This means that it supports the appropriate healthy functioning of the immune system.

Other studies have shown that Cordyceps can have a benefit in the vascular system as well. Cordyceps improves the function of the micro-circulation and improves efficiency at the capillary level. Cordyceps has been shown to help strengthen heart muscle.

This product is vegetarian. It is grown by modern fermentation technology. Extremely potent. The primary active constituents are cordycepin and various polysaccharides.

Traditional functions: Nourishes Jing (both Yin and Yang), strengthens the Kidneys and Lungs and tonifies Qi

Who can use this formula? Because it contains both Yin and Yang it can be used by anyone safely and over a long period of time. A powerful and proven athlete's herb and by those who desire to strengthen the functions of the body.