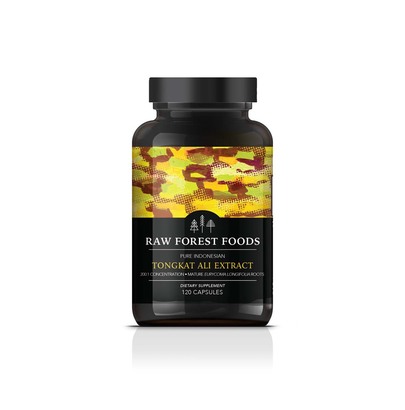 Once a secret aphrodisiac and anti-aging medicine of the Indonesian islands, Tonkat Ali (Eurycoma longifolia) has been clinically validated for its strong aphrodisiac qualities, its ability to significantly increase testosterone production, and its anabolic effect promoting the growth of lean muscle mass.

As men age, testosterone and other androgen hormones begin to taper off. This process is happening to younger and younger men, at more dramatic rates.The ultimate reason for this is unknown, but it is theorized that the cause is living in an environment polluted with chemical estrogen analogs, which enter the body and wreak havoc on the endocrine system. These chemical analogs are so powerful as to reverse sex in the wild, turning frogs from male to female. As we look around the world, there are populations which do not suffer as they age. Men remain strong, vital, and healthy into their old age. Their sexuality remains in tack, and they are active, contributing members of their communities. By many metrics, even into advanced years, they seem not to age. One of these places is the home of the plant known in the West as Tonkat Ali, Eurycoma longifolia. Tonkat Ali grows wild mainly in Indonesia and Malaysia.Long used as a strong anti-aging medicine and aphrodisiac, today clinical testing has provided encouraging validation to the known uses. Through controlled, scientific testing, several active ingredients in Tonkat Ali have been identified. The active ingredients found in Tonkat Ali are: Eurycomanone Quassinoids Beta-carboline alkaloidsIn validated clinical trials, Tonkat Ali has been proven through human and in vivo testing to: Significantly raises free testosterone levels Increase the amount and quality of sperm (a true metric to the health of the endocrine system) Strong anabolic action resulting in lean muscle growth Increased sexual activity, including arousal Causes cell death to several cancers, including breast and lung cancer In men and women alike, true biological age is marked partly by levels of testosterone. The higher the levels of testosterone, the lower the true biological age. As levels increase, many symptoms commonly associated with aging start to peal away, and the clinical results prove Tonkat Ali's effect upon aging. Tumor cell necrosis, natural building of lean muscle, healthy sex drive and arousal, and high levels of testosterone are all effects of use of Tonkat Ali, and are all associated with a low biological age.Tonkat Ali is poorly absorbed by the body. We use a 200:1 double extraction process resulting in the highest levels of bio-active ingredients. It takes one hundred times the amount of raw Tonkat Ali to produce our extract, but it is the only way to guarantee that you will reap the benefits from this important plant medicine.