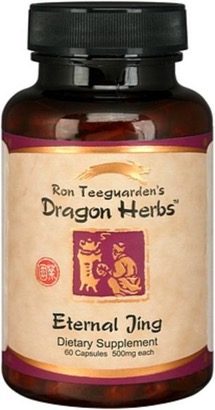 Restorative formula that contains four of the world's most powerful anti-aging herbs that support the restoration of Jing in every tissue and cell of the body.
$42.75
Out of stock

Eternal Jing is composed of herbs that have a powerful Jing tonifying effect on the body. This formula supports a variety of rejuvenation processes.

Deer placenta has a long history as a deeply restorative tonic in Chinese tonic herbalism. Over the past two thousand years various formulations have been used for the purpose of restoring spent Jing, the primordial energy of life, and thus rejuvenating the body and mind. Deer placenta is believed to be the closest placenta to that of human placenta, and scientific analysis has born that out. Placenta can be combined with other tonic herbs. A placenta restorative formula must contain herbs that support the restoration of Jing in every tissue and cell of the body, and of course should provide their own anti-aging power.

That is exactly what we have in Eternal Jing. Deer Placenta (a 20:1 concentrated extract) plus five of the world's most powerful anti-aging herbs: Goji (Lycium barbarum), He Shou Wu, Cinnamon bark, Eucommia bark and Dendrobium leaf – all of which have been extracted and concentrated using the most modern nutraceutical technology.  Each of these herbs plays a key role in cellular energetics, repair, and function. They protect the cell from oxidative stress and support the natural DNA-repair mechanisms that may diminish due to the natural process of aging. By combining Placenta and Eucommia, the placenta becomes activated and components of the placenta efficiently enter and exit from the nucleus of the cells and interact with dna in a regulated manner, increasing production of important proteins and hormones.

Burning the candle on both ends? If you want to extend your candle life, this formula is as close as you can get in terms of replenishing pre-natal Jing. Replenish Jing lost from stress or mere living. Experience the re-birth of profound energy.

The Herbs in Eternal Jing

To appreciate placenta, you have to understand Jing, our fundamental life force. Jing is the primal energy of life. It is closely associated with our genetic potential, and thus is intimately associated with the aging process. The quantity of Jing determines both our lifespan and the ultimate vitality of our life. We are given a certain amount of Jing by our parents when we are born. We deplete our Jing through our living. When we run low on Jing, we show the signs of aging, and when we run out of Jing, we die. Because of its original role of nurturing new life, placenta is considered to be the most profound substance for replenishing Jing. At conception, Jing of the mother and father merge and become one within the new fetal cell and this new life takes up residence in the womb. This united essence creates an energy which forms the foundation of the new human being's life. It is called pre-natal Jing. During pregnancy, the fetus relies upon the mother to nurture and protect the pre-natal Jing. The placenta is the source of this nourishment. Taking deer placenta as a deep Jing restorative supplement is like plugging yourself into the wall socket and recharging your life battery. Deer placenta provides certain substances that have been shown to have a profound positive influence on the aging process.

Placenta is an embryonic tissue formed during pregnancy from the cells of the fetus. The unique biological compounds in placenta ensure that the fetus is supplied with the necessary nutrients and oxygen needed for successful growth. Chinese antiaging and restorative formulations have often relied upon placenta as a primary ingredient in formulations designed to rejuvenate the body. Deer placenta has been accepted as the premier source of placenta. Deer is considered to be a "higher order" animal, and deer placenta very closely resembles human placenta chemically. It is extraordinarily nourishing and is completely safe to consume.

IGF-1 (Insulin-like Growth Factor-1) is a protein that promotes tissue growth, organ health, and healthy blood sugar levels. Almost every cell in the human body is affected by IGF-1, especially cells in muscle, cartilage, bone, liver, kidney, nerves, skin, and lungs. In addition to the beneficial insulin-like effects, igf-1 can also regulate cell growth and development, especially in nerve cells, as well as cellular dna synthesis. IGF1 mediates most of the growth-promoting and metabolic effects of growth hormone. Our body's demand for IGF-1 never decreases, but aging is accompanied by a loss of IGF-1. As our IGF-1 levels decrease, the physical exuberance and vitality that accompany youthfulness also recede. IGF-1 is a natural constituent of deer placenta, where it is found in high levels (IGF-1 is also found in deer antler). It is assumed that the deer placenta IGF-1, being a very large molecule, when consumed orally, is digested in the small intestines and broken down into amino acids and other components. The complete set of components provided by deer placenta of the IGF-1 may be used by the body to enhance innate IGF-1 production. Deer placenta's complete amino acid profile is extraordinarily close to that of humans. And deer placenta is rich in hyaluronic acid, an essential component in many tissues of the body. Hyaluronic acid helps to support healthy skin, eyesight and joint function. A 150 pound man has roughly half an ounce of hyaluronic acid in his body, one third of which is turned over (degraded and must be re-supplied or re-made) every day.

New Zealand is free from the major animal diseases found throughout the world. These diseases include "Mad Cow" disease (bovine spongiform encephalopathy), foot and mouth disease, rabies, chronic wasting disease, etc. Dragon Herbs regards New Zealand to be a Di Tao source of deer placenta. Its pristine environment contributes greatly to the health and vitality of New Zealand deer. We only use placenta that has been certified by the Department of Agriculture, Fisheries and Forestry of Australian government for pharmaceutical purposes.

This delicious tonic fruit is very widely used as an excellent Yin Jing and blood tonic. Regular consumption of Lycium is traditionally believed to lead to a long and happy life. It is said that prolonged consumption of Lycium will promote cheerfulness and vitality. Lycium is also said to brighten the eyes and improve vision. It is said that Lycium strengthens the legs and enhances sexual function. Lycium fruit contains polysaccharides that have been demonstrated to strongly fortify the immune system. Lycium is also very rich in vitamin C and in B vitamins. Furthermore, it is the richest source of carotenoids, including beta carotene, of all known plants on earth and is thus a powerful antioxidant. It is a very great woman's herb.

Constant consumption of this famous "longevity herb," whose Latin name is Polygonum multiflorum, is said in the Orient to help return an aging person to youthfulness and to keep a young person young. It is an unsurpassed Yin Jing tonic, as well as a major blood tonic. It is said to increase energy and to clean the blood. As an essence tonic, it is believed to be a powerful sexual tonic when consumed regularly. He Shou Wu is widely believed in China to increase sperm production in men and to increase fertility in women. It is used in almost all tonics that are believed in the Orient to nurture the hair and teeth. This herb has been consumed by almost every Taoist that has ever lived, and is fundamental to the practice of the Taoist inner arts.

Chinese Cinnamon bark is a strong essence (Jing) tonic that promotes good circulation and powerful internal energy. It is sweet and spicy, and has a hot energy. Cinnamon bark is said to increase the Yang energy and sexual vitality. The best Cinnamon bark in the world comes from Southeast Asia from trees where the bark is, at its best, over twenty years old. We use this Cinnamon to make Eternal Jing. Cinnamon is now known to be an anti-aging herb. It helps maintain healthy sugar metabolism in humans.

Eucommia bark is widely used as a tonic herb in Asia, where it is consumed by millions of people as a superior, life-enhancing tonic. Eucommia bark is traditionally used to tonify the Kidney, Liver and Heart functions. Eucommia is simultaneously powerful and gentle. It is the quintessential Kidney tonic that builds Jing, Qi and Shen, with an emphasis on its profound Jing building capability. It has a warm energy and is considered to be very strengthening, but it is not a "stimulant." In fact, Eucommia calms the nerves while strengthening the core of the body. Eucommia is the primary plant-sourced herb in Chinese herbalism used to support the Yang functions of the Kidney, which include such functions as our inner power, sexual vitality, structural integrity, and mental creativity. Its safety has been well established over many centuries. It may be used continuously by men or women without causing over-excitation or imbalance of any sort. Eucommia helps restore spent Jing and helps maintain healthy levels of Jing once Jing levels are normal. Eucommia is traditionally considered to be particularly beneficial to the lower back, legs, and to the skeletal structure. And although Eucommia is primarily known as a powerful Yang Jing tonic, it is also a strong Yin Jing nourishing herb. Because it provides both Yang and Yin, it is a superb herb for men and women alike and can be used by almost anybody to promote normal, healthy functions of the endocrine system, to support the physical structure, to support sexual functions, to support normal growth, and to promote the normal healthy functions of the cardiovascular system.

Eucommia is the only plant in the world known to have both phytoandrogenic and phytoestrogenic activity. Researchers have just recently discovered novel triterpenes and fatty acids in Eucommia that augment both androgen and estrogen effects on receptors. These compounds have no hormonal effects of their own, but support the effects of the sex hormones in the human body, and thus they may be termed "supra-hormonal," to describe their effect. When Eucommia's special biomolecules are present in the cells, the functions related to testosterone and estrogen are supported and modulated.

This variety of Chinese orchid is an excellent and delicious Yin Jing tonic and longevity herb. It is said to quickly and effectively replace spent "adaptive energy." It is widely used in the Orient by those who engage in a lot of sexual activity to replace the spent energy and to replace fluids; and thus it is commonly called "honeymooners tea." When combined with licorice root, it is also called "healer's tea," because it is said to provide healing energy which can be transmitted to others and replace spent healing energy. Thus body workers, other hands on healers, and all those who give of themselves from their soul, benefit by consuming Dendrobium. It has been widely used both by Taoist hermits and by the Chinese elite.

Dendrobium is primarily used in China to replenish fluids. It is commonly used in Chinese herbalism as a Yin tonic which moistens the Stomach and Lungs. It can be very effective in treating dryness problems like dry mouth, thirst, stomach pain, mouth sores, sunstroke, and dry lungs and air passages due to dry weather or due to pollution and smoke. In other words, Dendrobium is used to balance hot, dry conditions, to replace damaged or lost fluids and to relieve thirst, depression and deficiency fever as a result an illness.

Who can use it? Those who need to restore Jing