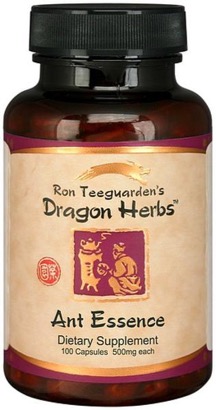 Ant Essence has been created by Ron Teeguarden based on traditional mountain ant-based formulas used by Taoist Masters and ancient herbal masters. By combining the ant with He Shou Wu and steamed Rehmannia root, this formula enhances Jing in a fundamental way. By combining ant with Dang Gui and Steamed Rehmannia, the formula helps support healthy blood. By combining ant with Eleuthero, Jujube, tangerine peel and Chinese Licorice root, the formula builds Qi. This is a complete and powerful restorative formulation that may be used for a lifetime as a primary tonic.

Fundamentally, Ant Essence Formulation is a premium, adaptogenic Jing tonic formulation. In Asia, ant is called the "Herb of Kings." Polyrhachis Ant, the specific variety of mountain ant used in tonic herbalism, is collected in the remote pristine forest from the western face of Changbai Mountain, a huge, remote, highly protected biosphere with no pollution in Manchuria. This mountain ant is blended with a powerful combination of Yin Jing-building and adaptogenic herbs, creating a powerful tonic and rejuvenation formula. It helps support optimal immune system functioning. Ant tonics are widely consumed in Asia to promote energy and strength. Ant helps to maintain a healthy Kidney system and skeletal structures.*

Polyrhachis Ant, also known as Mountain Ant, promotes strength, sexual vigor and is a powerful anti-aging agent. Research has proven that ants are highly nutritious and have powerful tonic and medicinal effects. Ant is considered a premium adaptogenic substance in the same ranks as Ginseng, Reishi and Cordyceps, the superstars of Chinese tonic herbalism. In fact, there is a saying in China that ginseng is the King of Herbs, but Ant is the Herb of Kings." Ant is widely used to boost the immune system, or to maintain already strong immune functions. Polyrhachis Ant, which is the unique variety of Ant used as a tonic herb, has been established to have double-direction benefits on the immune system, so it can be used by anyone with any immune disorder to regulate immune functions. It is widely believed to prevent common symptoms associated with aging, such as lumbago (low back pain), memory loss, joint problems, fatigue, menopausal symptoms, cardiovascular disease, etc.

Mountain Ant also strengthens the nervous system, digestive functions, detoxification functions and muscular system. Because of its long and short-term energy boosting effects, Ant tonics such as Ant Essence are ideal for athletes, especially when combined with Ginseng, Cordyceps and other similar tonics. Mountain Ant strengthens the entire Kidney system, including the sexual functions, skeletal structures and renal system. Ant has a serious reputation in Asia for increasing libido and virility. Both men and women claim that after using Ant for even a short time that their interest in sex increases significantly and that their sexual performance improves in numerous ways. Mountain Ant is extremely nutritious and safe. It is the richest source of zinc from a plant or animal on earth. It is extremely rich in amino acids and co-factors that make it an ideal nutrient. It is also very safe, and most people tolerate Mountain Ant with absolutely no difficulty. Allergies to Polyrhachis Ant are very uncommon.

Polyrhachis Ant makes up 50% of Ant Essence. The other 50% is Shou Wu Formulation.

Fallopia multiflorum is a tonic to the kidney and liver functions, toning up the vital essence and blood, fortifying the muscles, tendons and bones, and to prevent premature aging, maintaining the youthful condition and color of the hair, strengthening sperm and ova, fortifying the back and knees and as the premier longevity herb of Chinese tonic herbalism. Prepared Fallopia multiflorum is one of the most important and widely used Chinese tonic herbs. It shares the position as the primary essence tonic of Chinese herbalism with Lycium Fruit (Goji Berry) and Prepared Rehmannia Root.

Another attribute of the herb, associated with its Kidney and Liver tonic effects, is its ability to strengthen the lower back, the knees and tendons, ligaments and bones throughout the body. Thus Fallopia multiflora is not only useful for maintaining youthfulness but also for providing added strength to the body. It is also used to strengthen muscle. Fallopia multiflora is therefore very widely used by athletes and martial artists in Asia. It is a perfect essence tonic for the athletically inclined, providing strength, resilience and stamina to the body. Alone, or properly combined with other tonic herbs, Polygonum is an ideal longevity-promoting, anti-aging tonic herb.

Prepared Rehmannia Root is said to be the "Kidney's own food." It is a fundamental Kidney tonic in Chinese tonic herbalism, and is considered to be a primary longevity herb. It is found in a great many common "anti-aging" formulations. It is considered rejuvenating and life lengthening.

Prepared Rehmannia Root is usually combined with at least one Qi tonic to improve its assimilation and effectiveness. In this formula, Eleuthero (Siberian Ginseng), a major Qi tonic, is used. Eleuthero is a superb adaptogen and is also an excellent blood tonic. It quickly increases vitality as well.

Aged Citrus Peel, Red Jujube Date, Licorice Root are all Qi tonics that have the special purpose of helping to regulate Qi and improve digestion and assimilation of the main herbs in this formula. Fallopia multiflora and, to an even greater degree, Prepared Rehmannia are very rich, so these three herbs are included to make the Fallopia multiflora and Prepared Rehmannia easily digestible.

Who can use it? Men and women who want a powerful anti-aging formula that builds deep, long lasting energy