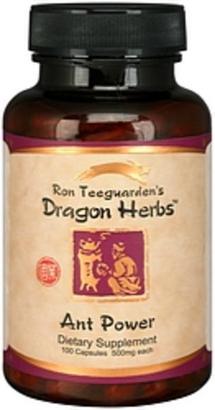 Anyone wishing to increase Yang, especially athletes. Men would typically take about double the dose of a Yang tonic formula such as this than a woman.
$32.00
Out of stock

This is a powerful formulation for building the deep power of the body. Mountain Ant is a potent energy tonic that has immediate and long term benefits. Combined with strong Jing and Qi tonics, Ant has the effect of strengthening sexual function, promoting mental power and creativity, and strengthening the organs and senses. This is a superb tonic for athletes.

Ant Power Formula is a Jing tonic designed to nourish the Kidney Yang and to build Qi. The main ingredient in Ant Power is the Polyrhachis Ant, also known as Mountain Ant. Ant is one of the greatest nutritional substances on earth and is a supertonic herb in the tonic herbal system. It is high in zinc, amino acids, and enzymes. The formula is made by combining Mountain Ant powder with powerful Yang tonic herbs designed to generate lasting inner power. Besides the Mountain Ant, this formula includes Morinda root (the "Strength Builder"), He Shou Wu (Polygonum multiflorum) root, Eucommia bark, Astragalus root, Heaven Mountain Goji berries, and other great tonic herbs.

Ant Power Formula can be used as a basic Yang tonic by anyone, young or old, male or female. It is a superb rejuvenation formula. It is a primal Jing tonic that may be consumed for a lifetime, and is the preferred Yang Jing tonic of many long time tonic herbalists. Ant Power is a formula that will help develop and maintain sexual health in both men and women.

Polyrhachis Ant, also known as Mountain Ant, promotes strength and sexual vigor. Mountain Ant has powerful tonic effects. Ant is considered a premium adaptogenic substance in the same ranks as Ginseng, Reishi and Cordyceps, the superstars of Chinese tonic herbalism. In fact, there is a saying in China that "Ginseng is the King of Herbs, but Ant is the Herb of Kings." Ant is widely used to help support a healthy immune system. Polyrhachis Ant (Polyrhachis vicina), which is the unique variety of Ant used as a tonic herb, has been established to have double-direction benefits, so it can be used by anyone to help maintain healthy immune system functions. It is widely believed to address common issues associated with aging, such as mild memory loss, fatigue, menopausal symptoms, etc.

Mountain Ant also helps to maintain a healthy nervous system, digestive functions, detoxification functions and muscular system. Because of its long and short-term energy boosting effects, Ant tonics such as Ant Power are ideal for athletes, especially when combined with Yang tonics such as Morinda root, Eucommia bark, and with Qi tonics like Astragalus root. Mountain Ant supports a healthy Kidney system, including the sexual functions, skeletal structures and renal system. Ant has a reputation in Asia for increasing libido and virility. Both men and women claim that after using Ant for even a short time that their interest in sex increases significantly and that their sexual performance improves in numerous ways.

Morinda root is an excellent Yang Jing tonic. It is used in superior tonic formulas for strengthening the body. It is widely used in primal Jing formulations, often as the main ingredient. Morinda is widely believed in China to increase mental power. It is also considered to be supportive of a healthy cardiovascular system. Morinda is excellent for martial artists because it makes you strong. In fact, it is know traditionally in China as "the Strength Builder."

Constant consumption of this famous "longevity herb," whose full name is Polygonum multiflorum, is an unsurpassed Yin Jing tonic, as well as a major blood tonic. It increases energy and can help clean the blood. As a Jing tonic, it is traditionally believed to be a powerful sexual tonic when consumed regularly. He Shou Wu is widely believed in China to nurture sperm production in men and to promote fertility in women. It is used in almost all tonics that are believed in the Orient to nurture the hair and teeth. This herb has been consumed by almost every Taoist that has ever lived, and is fundamental to the practice of the Taoist inner arts.

Eucommia is a superb Yang Jing tonic, used to support a healthy back (especially the lower back), skeleton, and joints (especially the knees and ankles). Eucommia is believed to confer strength and flexibility to the ligaments and tendons. It is often used by martial artists, yoga practitioners, Qigong practitioners, and other athletes to maintain a healthy back, knees, and the entire body.

Ligustrum is a Yin Jing tonic. It has been found to contain significant agents that help to support healthy immune system function. It is also used as a blood tonic. It has a slightly cool energy.

This tonic fruit is very widely used as an excellent Yin Jing and blood tonic. Goji can promote cheerfulness and vitality. Goji is also said to brighten the eyes. It is said that Goji strengthens the legs and enhances sexual function. Goji fruit contains polysaccharides that have been demonstrated to help support a healthy immune system. Goji is also very rich in vitamin C and in B vitamins. Furthermore, it is the richest source of carotenoids, including beta carotene, of all known plants on. All Goji used in this and other Dragon Herbs products comes from our plantation at the base of Heaven Mountain in Central Asia.

Dang Gui, Achyranthes, Dioscorea, Dipsacus, White Peony Root, Cornus and Licorice contribute to the strength building effect of this formula, each in their own way.

Who can use it? Anyone wishing to increase Yang, especially athletes. Men would typically take about double the dose of a Yang tonic formula such as this than a woman.

Usage: 2-3 capsules, 2 times per day or as directed by a healthcare professional