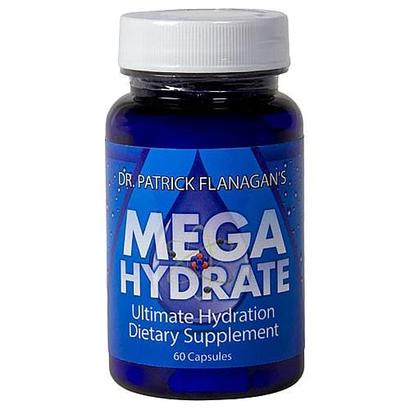 Much could be said about hydrogen, but really what Megahydrate does is have the safest, healthiest, most powerful form of stabilizing free electrons, also known as, antioxidants.Free radicals are what wreak havoc in our bodies and they do that by stripping electrons from everything they come in contact with.

This is one of the major factors in aging and ill health, the damage caused from free radicals.The remedy? Electrons. Free electrons that can be given from one molecule to another without turning the previous into a free radical itself. Most "anti-oxidants", such as ascorbic acid (vitamin C), do exactly that though.

The form that is left behind after they neutralize a free radical actually becomes a free radical itself, only now is less harmful and easier to remove from the body than what it just neutralized.

Why is Megahydrate the most powerful antioxidant known to man?

Because its one of the only things that we know of that doesn't turn into a free radical after neutralizing other free radicals. The bi-product is hydrogen, which then binds with oxygen to create water. Its greatest secret however, is that it converts every other antioxidant, turned free radical itself, back into an antioxidant that it comes in contact with. This is called "replenishing the anti-oxidant cascade".

Did you catch that? It replenishes every other anti-oxidant in the entire anti-oxidant cascade back into an antioxidant!

That is why it is the most powerful anti-oxidant known to mankind!

MegaHydrate is the key that unlocks the potential of water as the medium for nutrient replenishment and waste removal at the cellular level. In a state of dehydration, body cells cannot assimilate nutrients and remove waste and relieve pain from conditions like arthritis or fibromyalgia.

Dehydration also occurs as a side effect of caffeine. Caffeine effects include anxiety, dizziness, headaches, sleep disorders, and many common ailments. MegaHydrate also helps fight the negative effects of alcohol, stress, and free radicals as part of aging. In addition to hydration, MegaHydrate is the most powerful known antioxidant food.

Since it is an "pure" antioxidant that does not turn into a free radical itself, taken daily, MegaHydrate delivers far more Hydrogen ions than eating pounds of raw fruits and vegetables or drinking gallons of "healing waters," also known as "glacial milk." Humans need Hydrogen to survive. It is the key to long life and anti-aging.

In summary, MegaHydrate challenges the symptoms of dehydration and minimizes the process of aging. Many customers report immediate pain relief and increases in energy. MegaHydrate is a dietary supplement that is considered a food grade supplement rich in antioxidants by the FDA.

Antioxidant foods like MegaHydrate help defy the aging process. It is safe, having been tested and shown to have no known side effects.