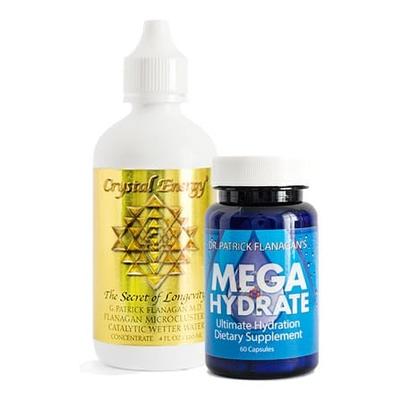 Much could be said about hydrogen, but really what Megahydrate does is have the safest, healthiest, most powerful form of stabilizing free electrons, also known as, antioxidants.

Free radicals are what wreak havoc in our bodies and they do that by stripping electrons from everything they come in contact with. This is one of the major factors in aging and ill health, the damage caused from free radicals.

The remedy? Electrons. Free electrons that can be given from one molecule to another without turning the previous into a free radical itself. Most "anti-oxidants", such as ascorbic acid (vitamin C), do exactly that though. The form that is left behind after they neutralize a free radical actually becomes a free radical itself, only now is less harmful and easier to remove from the body than what it just neutralized.

Why is Megahydrate the most powerful antioxidant known to man? Because its one of the only things that we know of that doesn't turn into a free radical after neutralizing other free radicals. The bi-product is hydrogen, which then binds with oxygen to create water. Its greatest secret however, is that it converts every other antioxidant, turned free radical itself, back into an antioxidant that it comes in contact with. This is called "replenishing the anti-oxidant cascade".

Did you catch that? It replenishes every other anti-oxidant in the entire anti-oxidant cascade back into an antioxidant! That is why it is the most powerful anti-oxidant known to mankind.

Crystal energy is how you turn regular water into Hunza water, but what is Hunza water?

Well, after the father of fluid dynamics, Henri Coanda, spent his entire life searching for the Fountain of Youth, he had actually come pretty close to figuring it out. He had studied the five mountainous regions of the world where people commonly lived a healthy productive life well over 100 years old and found that although they ate different food, the water they drank in all these different areas of the world, was all virtually the same. Henri Coanda set out to study the Hunza water of Pakistan in particular and in 1973, at the ripe old age of 78, he gave that research over to Dr. Patrick Flanagan. Patrick was only 17 at the time... and a nationally recognized child genius who had even made a spread in Life Magazine as one of the top 10 most promising up and coming scientists in the world at that time. He was also a consultant at a Pentagon think tank at that time and thats actually how and where he met Dr. Henri Coanda!

Imagine that, a 17 year old child genius doing consulting work along side the father of fluid dynamics (who was 78 years old at the time), and telling Patrick that the Fountain of Youth was real and that he was going to give him all of his research and one day he would figure it out!

Patrick claims its a natural process, but very complicated, thats why no one can duplicate it. He is a firm believer in a healthy, natural lifestyle and the purpose of his product is to replicate Mother Nature. The product is safe and effective and should really be taken daily throughout ones life to fully reap the benefits.

The properties of Hunza water are: a lower surface tension and freezing point, a high zeta potential, natural colloids, minerals and a unique tiny form of silica that holds the keys to the secrets of this water.

The Secret to Immortality

The greatest secret to immortality is protecting, as well as lengthening and regrowing our Telomeres, but what are Telomeres? They are like the lifeline on our lives. Literally like a fuse that gets shorter and shorter as we age, and when it runs out, we're dead. Some people have compared them to plastic tips on shoelaces. Without them the ends of our chromosomes would fray and stick to each other, which would either destroy or scramble our genetic information. Dr. Patrick Flanagan is one the main pioneers in Telomere research. What he and other researchers have discovered is that our Telomeres break off every time our cells divide. Unfortunately our cells only divide a fixed number of times throughout our lifetime, about 50 times. This is known as the Hayflick limit. Once the Hayflick limit is reached, which is usually around age 60-65 in most people, our cells no longer divide and we go into old age and eventually we die. What we know now is that the Hayflick limit is controlled by Telomeres and every time our cells divide a piece of our Telomeres break off. The main reason our Telomeres are shortened is because of this process of cell division and the subsequent consequence of a piece of our Telomeres breaking off every time that happens. What Patrick was able to figure out with his products is that cells could exceed the Hayflick limit by 4-5 times longer. Meaning a human cell that would live roughly 75 years would live 300 years. What this implies is that somehow his products are protecting our Telomeres and not allowing as much of them to break off every time our cells divide. The greatest thing though, about all this research, is that he didn't even modify his products to do this. He had already created the products, which were discovered in a quest for the Fountain of Youth. All he had done was isolate what was happening in special glacial waters where people lived healthy, productive lives well over 100 years old and then replicated the characteristics of that water.