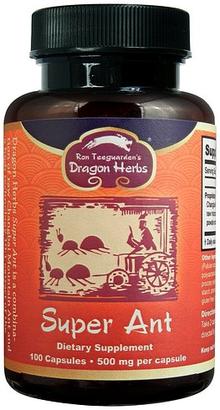 Polyrhachis Ant is one of the adaptogenic superstars of Chinese tonic herbalism. Classically considered one of the "forever young foods" incorporated into daily diets, Polyrhachis Ant is widely consumed in Asia as a dietary supplement for its many known benefits. This Mountain Ant is famous for supporting many important life functions and for its replenishing tonic properties of restoring Qi, increasing vitality and nourishing the blood. Polyrhachis Ant is also one of the few truly powerful adaptogenic substances of the earth, helping the body to naturally adapt to change and common stress as efficiently as possible. Polyrhachis Ant is one of the few 'herbs' that gives quick Qi to the brain and body, while simultaneously restoring its original source, the Kidney Yin, creating its supertonic reputation for both Qi and Jing.

Polyrhachis Ant is a source of zinc; it has the highest known content among all living organisms. Being a critical element in healthy human sexual function, zinc is known as the 'harmonizing' element in Japan, for its support of 'harmonious relations' between couples. Studies have shown that regular consumption of Polyrhachis Ant provides useable zinc. While supporting the balance and delivery of hormones within the body, ant is not itself a source of hormones and can be safely consumed by both men and women, young and old.

As a renowned Jing Yin tonic, Polyrhachis Ant strengthens the entire Kidney and adrenal system, supporting the musculoskeletal system, while also supporting sexual function. In Asia, Mountain Ant is considered an aphrodisiac ("Ginseng is the king of herbs, but Mountain Ant is the herb of kings"). Ant supports the nervous system, supports digestive functions and supports the natural moment-to-moment detoxifying functions throughout the body.

Polyrhachis Ant is known to Increase the production of dna and rna within the cell itself. A unique set of aldehyde compounds found in Polyrhachis Ant is believed to contribute to the Ant's unparalleled physical strength, known to be able to lift up to 400 times and drag 1,000 times their own weight.  This aldehyde provides the great tonic action for the human body.