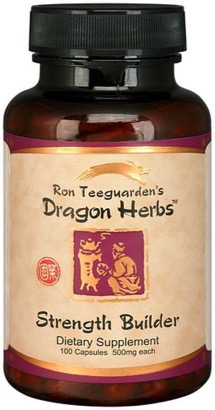 Tonifies Kidney Yin and Yang and builds Qi and blood. Builds primal strength!
$21.85
Out of stock

Real strength comes from the Three Treasures. These are the fundamental energies of life. All strength is rooted in Jing, the primal energy of life. When Jing is abundant, the body has the root power it needs to work and play vigorously and to live a long, successful life. Any formula or herbal program designed to build "strength" must help build Jing. Jing is divided into Yin Jing and Yang Jing. Yin Jing is the basic fuel of life. Yang Jing is the raw power of life. Together, they generate strength. There are a number of very effective herbs that tonify (rebuild and maintain) Jing in the human body. These are known as Jing tonic herbs. When combined, they formidably build Jing within the body.

Strength Builder is designed to build and preserve Jing. It supports the production and maintenance of Kidney Yin and Yang. It is a potent formulation designed to provide herbal nutrients for athletes and other highly active individuals. This formula may be used by those wishing to increase athletic and/or sexual power, and by those interested in becoming generally more vital. It is suitable for those who wish to maintain an active lifestyle. Strength Builder can be used to strengthen the skeletal and muscular systems and is particularly useful as a tonic for those who use both their brains and their brawn to succeed.

Strength Builder is a powerful Jing tonic. It contains powerful Yang herbs (Morinda and Eucommia) and it is a very powerful Yin tonic as well (He Shou Wu, Goji, Ligustrum and Cornus). When these herbs are combined and consumed together, the body will accumulate and store Jing.

Qi is the energy in our body that is derived from eating (nutrition) and breathing. It is our day to day energy – our vitality. Qi tonics strengthen our assimilation and our respiration so that we can make Qi and use it in our body. Qi tonics are valuable because they build immediate and lasting strength.

Strength Builder contains three excellent Qi tonics – Astragalus, Dioscorea and Licorice. These Qi tonics have been consumed for millennia for the purpose of enhancing strength, a fundamental characteristic that plays a pivotal role in survival, success and flourishing. The Qi tonics in Strength Builder have been chosen because they support the production of Jing-based strength. They also contribute to the assimilation of the rich Jing herbs contained in this formula.

Strength Builder has one more important component. It has a super-potent blood tonic section – Goji, Astragalus, He Shou Wu and White Peony. When these four herbs are combined, the body will produce more fresh blood, which enhances all the functions of the body and mind.

The Herbs in Strength Builder

Morinda is an excellent Jing tonic. It is yang. Morinda root is an empowering herb, whose name in ancient times was "Strength Builder." It is considered to be highly nutritious and is used in superior tonic formulas for strengthening the body. It is widely used in primal Jing formulations, often as the main ingredient. Morinda is widely believed in China to increase mental power as well as physical strength. It is also considered to be beneficial to the heart, supporting cardiovascular functions in healthy people. There are many different grades of Morinda root available. Of course, premium grade Morinda root contains more tonic chemistry and has a smoother, more powerful effect. Dragon Herbs uses Grade A Morinda root to produce Strength Builder.

Constant consumption of this famous "longevity herb," whose full Latin name is Polygonum multiflorum, is said in the Orient to help "return an aging person to youthfulness and to keep a young person young." It is an unsurpassed Jing tonic, on the Yin side of the spectrum. It is also a major blood tonic. It is used in China to increase energy and to clean the blood. As a Jing tonic, it is believed to be a powerful sexual tonic when consumed regularly, especially when combined with Yang herbs. He Shou Wu is widely believed in China to increase sperm production in normal healthy men and to increase fertility in normal healthy women. It is used in almost all tonics that are believed in the Orient to nurture the hair and teeth. This herb has been consumed by almost every Taoist that has ever lived, and is fundamental to the practice of the Taoist inner arts because it fosters the strength to perform Qi Gong and Gong Fu. He Shou Wu becomes stronger as it matures in the ground. Young He Shou Wu roots that are commonly used in herbal commerce do not have much Jing or Qi. As the roots mature, they absorb Jing and Qi from the earth and store it. He Shou Wu is considered to be the strongest accumulator of Qi in all of herbalism. But young roots have not had time to accumulate much Qi. Dragon Herbs uses only mature He Shou Wu roots to make Strength Builder. The roots have grown for four to ten years before collection. Also the roots are processed according to ancient tradition by cooking in black bean soup, creating the world famous HeShou Wu tonic herb.

Eucommia is a superb Yang Jing tonic, used to strengthen the back (especially the lower back), skeleton, and joints (especially the knees and ankles). Eucommia is believed to confer strength and flexibility to the ligaments and tendons. It is often used by martial artists, yoga practitioners, Qi Gong practitioners, and other athletes to strengthen their bodies. Eucommia is widely used in China as a safe and effective sex tonic for men and women. It is a very strengthening tonic. Like the other herbs, there are many grades of Eucommia. Eucommia bark is carefully and sustainably removed from Eucommia trees. The older the tree, the stronger the herbal effects. Dragon Herbs uses only old, Grade A Eucommia bark to make this product.

One of the most important herbs in the world, Astragalus has been recognized as a superb and potent tonic by modern researchers. Astragalus has been used for over 2000 years to strengthen the body as a whole. Astragalus is believed by the Oriental people to strengthen muscles and improve metabolic functions. This famous herb is widely grown. Its range of grades is staggering – from almost useless garbage to sublimely powerful tonic herb. Most herbal products sold in America use low grade Astragalus roots. Dragon Herbs uses premium Astragalus roots from its ancient growing place, high in the mountains and away from pollution. It is loaded with Astragalosides that provide its herbal power. The strength of the Astragalus determines the potency of this or any formula that contains it.

This famous herb/superfruit is very widely used as an excellent Jing and blood tonic. Regular consumption of Goji is traditionally believed to lead to a long and happy life. It is said that prolonged consumption of Goji will promote cheerfulness and vitality. Goji is also said to brighten the eyes and improve vision. It is said that Goji strengthens the legs and enhances sexual function. Goji fruit contains polysaccharides that have been demonstrated to strongly fortify the immune system. Goji is also very rich in B vitamins.

Ligustrum is a Yin Jing tonic herb that is said by the Chinese to prolong life. It has been found to contain significant immune enhancing agents. It is also used as a blood tonic. It has a slightly cool energy. It confers strength to those who consumer it on a consistent basis.

Other Herbs in Strength Builder

Dang Gui, Achyranthes, Dioscorea, Dipsacus, White Peony Root, Cornus and Licorice contribute to the strength building effect of this formula, each in their own way.