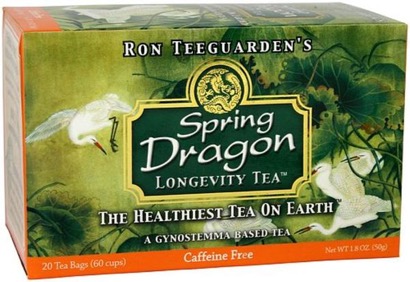 Gynostemma is a potent antioxidant that protects cell membranes from oxidative injury which can result in chronic inflammation.
$10.95
Out of stock

Spring Dragon Longevity Tea™ is a delicious herbal tea composed of the most famous tonic herbs in the Orient, all of which are renowned for promoting a long and healthy life. The main herb is Gynostemma, a green leafy herb that is consumed throughout Asia to promote overall health. Gynostemma has a strong anti-fatigue effect. In Asia, it is consumed by tens of millions of people every day, often in place of tea or coffee.

In Asia, Gynostemma is considered to be:

Gynostemma has been shown in animal studies to have liver and cardiovascular-protecting benefits and to support normal healthy functioning in these organs.

The ultimate greatness of Gynostemma lies in its broad spectrum adaptogenic (stress modulating) quality. Adaptogenic herbs improve the efficiency of the metabolic, neurological, immunologic, respiratory and endocrine systems. Prolonged consumption of Gynostemma tends to have a highly protective quality because it strengthens the adaptive capacity of the person at every level of their life.

Gynostemma has the ability to bring balance to the body under a wide range of stressful circumstances.

In 1972, a group of Japanese researchers reported that Gynostemma tea was being consumed as a daily "longevity tea" by large numbers of southern Chinese people. It was revered in the regions where it grew as "magical grass" because of its many reputed health benefits. Subsequently, studies conducted first in Japan revealed that Gynostemma was extremely rich in saponins that were extremely close to those found in ginseng and Siberian ginseng. As it turned out, Gynostemma is even richer in these saponins than ginseng. Gynostemma tea had generally been made from wild mountain Gynostemma pentaphyllum plants, but as Gynostemma reputation as a longevity herb grew, farmers learned to cultivate it. Within a decade, Gynostemma was being consumed by millions of Asians as a tonic tea.

in 1992, Ron Teeguarden was traveling to China to oversea a production run of tonic herbal formulations. Because of a ticketing mistake, he was upgraded to first class. By coincidence, he was seated on the long flight from San Francisco to Beijing next to Professor Xiao Peigun. Also, by "coincidence," Ron had an photocopied article written by Professor Xiao in his travel bag. The article was entitled "Anti-Aging Chinese Herbs." Xiao Peigun, as it turned out, was Director of the Institute of Medicinal Plant Development in Beijing, a major research institute belonging to the Chinese Academy of Medical Sciences. He was also head of the World Health Organization (WHO) Collaborating Center for Traditional Medicine, Commissioner of the Committee on Pharmacopeia for the People's Republic of China and a Commissioner of New Drug Evaluation for the PRC. In other words, he was one of the most powerful and knowledgeable herbal experts in the world. Because Ron had his article on the plane, Professor Xiao took Ron under his wing. When Ron met with Professor Xiao at the institute, he asked Professor Xiao if he knew of any special tonic herbs with significant anti-aging qualities. Professor Xiao responded instantly that Gynostemma was exactly what I was looking for. Professor Xiao introduced Ron to the supplier of the highest quality Gynostemma in China and Ron was ready to develop a product.

Gynostemma is traditionally consumed as a tea, just like green tea. It is delicious as well. At the same time, Ron had come across a special, traditional Chinese method of brewing "longevity teas" by supersaturating extracted herbs into tea leaves. Ron decided to use this ancient technology to supersaturate Gynostemma leaves with a number of other tonic herbs that had traditional reputations as longevity herbs. With the help of Yanlin, he found a tea master who knew the secret of preparing the "longevity teas." After experimenting for several months at Yanlin's parents home in China, the final tea was determined and thus was born Spring Dragon Longevity Tea.

Called the "quintessence of Chinese herbs," Schizandra is a delicious, exotic tonic fruit that is traditionally used to tonify all the systems of the body, clean the liver, open the lungs, nourish and moisturize the skin, and sharpen the mind. It is a potent antioxidant.*

Known in Asia as a premier "longevity and anti-aging herb," this delicious tonic fruit is a true superfood, rich in antioxidants. It is famous for enhancing strength, vision and beauty. Goji is rich in immune-potentiating polysaccharides.

One of the most important herbs in all of herbalism, Astragalus is highly regarded for its immune-regulating, immune-potentiating effects. It is also a potent energy tonic and blood tonic.

Also known as "Siberian Ginseng," Eleuthero is famous for its ability to enhance physical and mental endurance, to help us handle stress more efficiently and as a gentle mood elevator. Eleuthero, like ginseng and Gynostemma, is rich in saponins. It is the ultimate adaptogenic herb.

This delicious, exotic fruit has been used for centuries as a lung tonic. It contains mogroside, a potent immune-potentiating glucoside.

Precautions: If you are under a doctor's supervision for cardiovascular disease, check with your physician prior to using this or any herbal product.