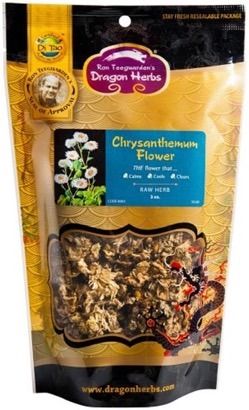 Chrysanthemum Flower (Chrysanthemum morifolium) is consumed as a tea to nourish the Yin and as an herb to remove wind and occasional heat (irritation) from various areas of the body in normal, healthy individuals. For thousands of years it has been used in Asia. Today, it continues to be one of the most commonly consumed herbs in Asia, consumed by millions of people every day as a delicious, satisfying health beverage. It is China's quintessential summer tea because of its cooling effect on the body, especially the face and head. Tens of millions of cups are consumed every day during the hot months of summer.

This delicious flower is most famous for its ability to support vision and eye health. It is widely used to brighten the eyes, improve vision and to clear minor, occasional irritation from the eyes. It helps to support the natural healthy moisture and coolness of the eyes. In Asia, it is used for minor, occasional eye strain, soreness and redness in normal healthy individuals. It is very widely used by those who experience mild, occasional dry eyes or redness due to irritation by dust, wind and outside temperature increases by normal healthy individuals, especially in the summer time.

Chrysanthemum flower tea can serve a very useful purpose in a tonic program. Since it is a normal human process, especially as we grow older, for "heat" (false yang) to rise in the body, an herb that can modulate this rising heat can be very important to maintaining normal healthy functions and maintaining a youthful appearance. Chrysanthemum is among the most important of the herbs used for this purpose (Gynostemma being the other great tonic herb that accomplishes a similar result, though not quite as directly as Chrysanthemum). Chrysanthemum, especially when combined with Gynostemma, can provide considerable balancing effect for those people who like to consume warm tonic herbs (such as Ginseng, Astragalus and Deer Antler) and feel some rising heat, especially in the hot months. Thus, Chrysanthemum Flower is a smart product to have on hand by those on full tonic programs.

Chrysanthemum is also used in Asia to clear the mind. Consuming a relaxing cup of Chrysanthemum tea at bedtime is believed to improve one's memory, especially when memory is overtaxed by mild, occasional overwork or stress, or due to too much thinking, reading, worry and/or computer work. Consumed during the day or in the evening, it helps relieve stress and tension in normal healthy individuals.

Chrysanthemum Flower is renowned for its benefits to the skin, as it supports healthy moisture content and helps prevent wrinkling due to dryness, wind and heat. It is one of the Orient's premier beauty herbs.

Ingredients
Chrysanthemum flower.
Suggested Use
Add 5-10 flowers to a brew (12-20 oz.) made with Chrysanthemum eeTee (code 815). The dry Chrysanthemum flowers expand to beautiful blossoms. They are wonderful as a garnish. They also enhance the aroma, flavor and functional characteristics of Chrysanthemum eeTee. The flowers will continue to extract in a heated brew. You may add a handful of Heaven Mountain GojiBerries to further fortify Chrysanthemums liver and vision benefits.
Quantity & type
3 oz.
Brand
Dragon Herbs
Model
3 oz.