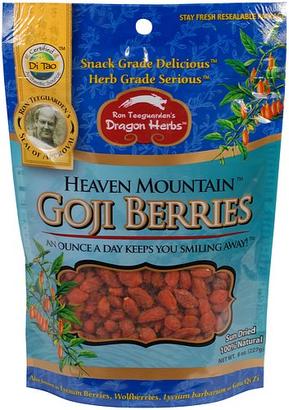 Millions of people throughout Asia consume Goji berries every day for both their unique, satisfying flavor, and for their health benefits.
$14.99
Out of stock

Dragon Herbs Goji Berries
Millions of people throughout Asia consume Goji berries every day for both their unique, satisfying flavor, and for their health benefits. In China's first herbal encyclopedia, Shen Nong's Materia Medica, written in the 1st century B.C., Goji was classified as a "superior tonic," a class of herbs that people should take on an on-going basis to preserve youth and to promote general well being of life. Goji's superior tonic classification has stood the test of time. Two thousand years later, Goji berries are still being consumed regularly throughout Asian civilizations for those purported reasons. We now know that Goji berries are a "high-ORAC" antioxidant-rich superfruit featuring important phytochemicals such a beta-carotene, zeaxanthin, betaine, polysaccharides (LBPs), trace minerals and vitamins.

Heaven Mountain Goji Berries, the only Goji berries that are snack-grade delicious™

Heaven Mountain Goji Berries are plump, juicy, naturally sweet, and absolutely delicious. Unlike other Gojis on the market, Heaven Mountain® Goji Berries are sweeter, fleshier and have less seeds. They have a much higher moisture level which contributes to their texture as plump and juicy. Most Gojis on the market are rock hard. This is not without a reason. All the Gojis sold in the US come from China, whether they are labeled as Himalayan, Tibetan, or Wild. That translates to a very long transit time from the growing regions to the hands of the consumers. Typically, the berries reach the consumers at least 4-6 months after they are harvested. To stay shelf stable, most Goji farmers dry their Goji until the berries are very bone dry and very hard. After years of research and development, Dragon Herbs has developed a special handling process and a custom designed packaging that allows the berries' natural moisture level to be retained while satisfying the shelf stability required in commercial trade nowadays. In a test conducted by an independent lab, Heaven Mountain® Goji Berries are shown to be twice as juicy as a competitor's.

Simply put, Heaven Mountain. Heaven Mountain is a remote mountain range in the northern region of Xin Jiang Province, China. In a more sophisticated way, the concept of Di Dao used in the world of herbalism can best describe the relationship between the geographical and geological features of the region and the phyto chemical profile of Heaven Mountain® Goji Berries.

The "Di Tao" of HerbsThere's a great concept in China known as Di Tao. The literal translation of Di Tao is "Earth Tao," or "the Way of the Earth." The Chinese dictionary definition of Di Tao is "from the place noted for the product ~ genuine, authentic, not from an inferior or counterfeit source." According to the regulations of the Chinese Pharmacopeia, all herbal products manufactured and sold in China must utilize herbs that are Di Tao - that is, the herbs must come from a source that is considered legitimate and genuine. All plants are the product of their growing environment and conditions. Different regions have their distinctive make-up of water, soil, sunshine, climate, and biological distribution. The varying methodologies adopted by different regions in their cultivation, collection, and final preparation of the herbs further differentiate the herbs from different sources. The Di Tao source of an herb is gradually established through the historical use of the herbs. By documenting how herbs from different origins differ in their pharmacological effects on the human body, the regions or sources that produce the most desired results have slowly come to be recognized as the authentic genuine source, Di Tao, both by common knowledge among the practicing herbalists as well as by government supported official recognition in the materia medica. Heaven Mountain® Goji Berries is one such example. The water, the soil, the sunshine and the weather have the precise qualities necessary for producing the best, richest, tastiest, most potent Goji berries on Earth. As a result, they have an extraordinary and balanced phyto-nutrient profile.