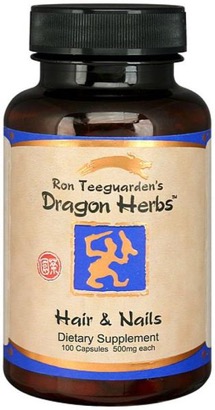 Though Hair and Nails Formula is named for its ability to promote healthy hair and nails, it could just as easily be called "Longevity Formula."
$17.10
Out of stock

Historically, He shou wu-based combinations are always considered to be longevity formulas and are highly favored in Asia. They support Jing, the primal energy of life. Hair and Nails Formula is based upon the tonic herb He shou wu.

Though Hair and Nails Formula is named for its ability to support healthy hair and nails, it could just as easily be called "Primal Jing Formula." The herbs all support Jing. Hair and Nails Formula has strong antioxidant activity, and is considered an excellent Yin Jing tonic that may be used as a basic formula in a personal program.

The formula  supports circulation, removes toxins and stagnation, and helps regulate hormonal functions. Hair and Nails Formulation has strong antioxidant activity, and is considered an excellent Yin Jing tonic that may be used as a basic formula in a personal longevity program.

Research has demonstrated that He Shou Wu (Polygonum multiflorum), when properly prepared, can significantly increasesuperoxide dismutase (SOD) activity. SOD is a powerful natural antioxidant and free radical scavenger produced naturally by the human body. He Shou Wu roots must be cooked in black bean soup to make it work properly. This preparation is critical. Not all HeShou Wu on the market has been prepared properly. Dragon Herbs takes great care to make sure that He Shou Wu is properly prepared for this and other products that contain He Shou Wu.

There is an old story which describes the discovery of Polygonum multiflorum (He Shou Wu). There was a poor fellow living alone in a forested area of China. He had been born with a weak constitution. Due to his chronic frailty, he had never been able to marry and had long since given up on the prospect. One day he was collecting wood in the forest when he observed a pair of vines entwined. He thought to himself that they appeared to be making love, and in a whimsical mood dug up the root of the plant, which he took back to his cottage. There he cooked the tuber in the fashion of an herb tea and consumed it over a period of time. To his surprise, he started to feel an unknown vitality flowing through his veins and after a little while he noticed certain urges starting to develop. Various versions of the story go on to describe various degrees of incredible virility as it developed in this previously hapless guy. He soon found a lovely young wife and had several children. Furthermore, "his gray hair turned from white to black and his loose teeth became firm," according to the legend. He took on the name "Old Black Hair," or He Shou Wu. His sons later named the herb He Shou Wu (Old Black Hair), after their father. Since that discovery of the herbs influence on hair, it has been used by tens of millions of people in Asia to nurture healthy, beautiful hair.

Who can use it? : Anyone

Precautions: Rare cases of gastrointestinal disturbance are the only side effects associated with Polygonum multiflorum. Soft stool is the result. However, moderate doses of Polygonum multiflorum rarely result in such an effect. The effect can be corrected by combining with herbs that remove dampness through the urinary pathway, such as Poria, Atractylodes (red or white), etc.