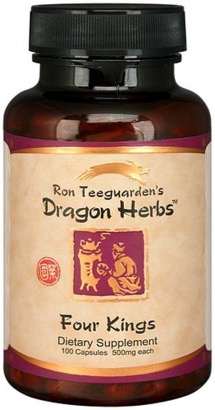 Fortifies the protective functions. Tonifies Jing, Qi and Shen
$34.20
Out of stock

The Herbs in Four Kings

Reishi mushroom (Ganoderma lucidum) is the most revered herbal substance in Asia, ranking as the elite substance for the attainment of radiant health, longevity and spiritual attainment. It has maintained that position for at least 3000 years, and its reputation and value are only increasing.  Numerous legends provide a rich and extensive record of Reishi in Asian society.

Reishi has traditionally been used as an anti-aging herb. It has long been a favorite tonic supplement used by the Chinese Royal family and virtually anyone who could obtain it. Reishi was particularly revered by the followers of the Taoist tradition as the "Elixir of Immortality." Taoists have continuously claimed that Reishi promotes calmness, centeredness, balance, inner awareness and inner strength. They have used it to improve meditative practices and to help protect the body, mind and spirit so that the adept could attain both a long and healthy life and "spiritual immortality" (enlightenment). Due to its rarity in the past, the common people could rarely obtain a Reishi mushroom, and it was popularly revered as a greater treasure than any jewel.

Traditionally, Reishi is said to be a nourishing tonic for all Three Treasures (Jing, Qi and Shen). It is considered to be capable of building body resistance, and to be powerfully detoxifying to the cells and tissues of the body. Reishi is slightly calming on an immediate basis but builds energy over time. Reishi is universally believed is Asia to prolong life and enhance intelligence and wisdom.

It is absolutely safe, being non-toxic.

Many chemical constituents play a role in Reishi's immune modulating capacity. But Reishi does not just "stimulate" the immune system, it regulates it in otherwise healthy individuals, which is what makes Reishi so precious. Ganoderic acids present in Reishi, help improve oxygen utilization and improve liver functions. Ganoderic acids are also potent antioxidant free-radical scavengers.

Agaricus mushroom is not a traditional Asian herb. It is a Brazilian rainforest herb that has won huge acceptance in Asia and is now commonly incorporated into Chinese tonic herbal formulations in China and Japan. It supports normal immune system functions. It is believed to be the richest source in the natural world of a type of polysaccharide known as beta-glucans, which has been established to support immune functions in normally healthy individuals.

Cordyceps is one of the absolute superstars of the Chinese tonic herbal system. It is an effective and powerful life-enhancing agent, ranking right up there with Ginseng, Reishi and Deer Antler.

Cordyceps is used to help support the body and mind at a fundamental level. It was said in an ancient herbal classic to be able to support the "primary motive force for life activities."  Because it contains both Yin and Yang it can be used by anyone safely and over a long period of time. It replenishes Yin Jing, restoring the deep energy expended as a result of exertion, adapting or from aging.  Cordyceps is thus one of the primary herbal substances used in tonic herbalism for the purposes of rejuvenation.

Cordyceps is very widely used for the purposes of supporting the primal Kidney functions, which include sexual functions, brain power and structural integrity. It is a powerful Yang tonic. As a sexual tonic, Cordyceps is considered to be one of the best.

Cordyceps is considered in Asia to be a powerful athlete's tonic. It has no steroidal constituents, but supports respiration and the adrenals.

Maitake mushroom has gained a place in tonic herbalism due to its broad spectrum tonic benefits similar to Agaricus and Reishi. Like Agaricus, it is primarily beneficial to the immune system, having double-direction activity on the entire immune system.

Who can use it? Anyone, especially those who wish to fortify their immune systems