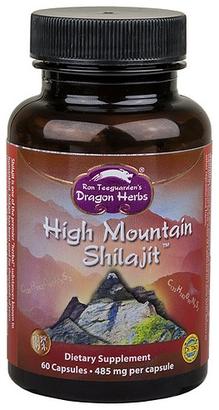 A natural substance with life giving power.
$37.05
Out of stock

There is really nothing else on earth like Shilajit.

Shilajit is a rare tonic "herbal" substance collected by local inhabitants in the Himalayas and as far north as Russia. It has been used for thousands of years as a tonic. Shilajit is regarded by many herbalists as the most important natural tonic substance of Ayurveda (the traditional Indian health care system). In Sanskrit, Shilajit means "conqueror of mountains and destroyer of weakness."

Shilajit is an "exudate" that oozes out of cracks in the Himalayan rocks and cliffs in the summer months. It is composed of organic plant material that is thought to have been compressed by rock for hundreds of years. After it is collected, it is naturally purified, concentrated and processed into a potent, high-quality extract.

Shilajit is extremely rich in plant-source 'organic' minerals. Most assays show that Shilajit, depending on its source, contains between 70 and 85 complexed minerals and trace elements. Shilajit is a humic substance, humus being the natural material that is formed when soil microorganisms decompose organic material into elements usable by plants. Shilajit is astoundingly rich in nutrients, antioxidants, amino acids, and phytochemicals.

The main active component in Shilajit, to our knowledge, are macromolecules known as fulvic acids. Shilajit is extremely rich in fulvic acids (Dragon Herbs Shilajit, from high altitude in the Himalayas, contains approximately 40% fulvic acids). Fulvic acids are one of nature's most astounding and miraculous molecular substances, perhaps second only to dna in its importance to life on this planet.

The Functions of Shilajit

Fulvic acid supports every stage of cellular metabolism. It is thus a quintessential Qi tonic, a substance that improves human vitality.

Fulvic acid has the ability to neutralize free radicals throughout the body and to detoxify simple toxins. This is due to its huge surface area and enormous total valence.

Shilajit is traditionally considered to be a strong kidney tonic. From a Chinese perspective, it is a superb Jing tonic, since it increases the primal energy responsible for sexual and spiritual power.

3. Enhances bioavailability and action of other herbs.

5. A carrier – binds to herbal constituents and minerals, delivering them to their targets.

6. A catalyst – promotes the activity of minerals and organic constituents.

12. Used for general fortification and tonification of the entire body.

Who can use shilajit?

Authentic, correctly processed Shilajit is extremely safe. It is suitable in small doses for almost everyone on a regular basis, and in higher doses for those who seek to increase vitality, strength and immunity, and by those who wish to cleanse the tissues of the body. Shilajit is warming, so it should be used watchfully by those with excessive fire and may be combined with cool and yin herbs.

The Science (As We Know It)

Fulvic acids are one of the largest classes of dissolved organic matter, but from a scientific point of view, they are poorly defined and of unclear origin. All fulvic acids studied show the same pattern in the elemental composition of their molecules and a large similarity in the molecular sets. It is thought that the elemental and structural regularity of fulvic acid molecules does not indicate one common precursor material and formation process, but that their regularity is due to both the strong reworking of source materials in the environment and the valency of the three elements (C, H, O) from which most fulvic acid molecules are formed.Valency is the power of an atom or radical to combine with other atoms measured by the number of electrons which an atom will give, take, or share to form a chemical bond; thus valency is a measure of the reactivity of an element or active molecule. Poly-carboxylic acids with very limited number of hydroxy groups are the major compound class in fulvic acid isolates. It appears thatfulvic acids are metastable molecules that characterize a state of transition of diverse precursor compounds during their oxidation.

Himalayan Shilajit is believed to contain a unique range of fulvic acids, which over the period of human history, has been discovered to have specific health benefits to humans. This is probably a result of the specific chemical nature of the special physical conditions and forces, and the rocks and biological materials from which it was created.

Fulvic acid is considered to be one of the most powerful natural electrolytes known to man. It enhances the permeability of cell membranes, and can improve the healthy permeability of the digestive tract, renal membranes and capillaries. Fulvic Acids greatly enhance the bioavailability of trace minerals required by the body to function optimally. The fulvic acids available in Shilajit have the ability to restore electrical balance to damaged cells. When these fulvic acids are present in bodily and cellular fluids, minerals become ionized – in fact, they become part of the fulvic acid itself. Thus they become "colloidal."

Colloids are microscopic particles suspended in some sort of liquid medium. The particles are between one nanometer (1 nm) and one micrometer (1 μm) in size and can be macromolecules (such as fulvic acid). Thus colloids are particles larger than molecules, but smaller than grains of sand. Mere size, however, is not the important thing about colloids. The overwhelmingly important property of colloids is that they have a very large surface area. To some degree, they are all surface and their properties are those of their surfaces. This is highly significant in the biological world.

Within bodily and cellular fluids, and as part of the fulvic acid complex, minerals become organic. In this form, minerals are safe. As such, they are perfectly bioactive and bioavailable in living tissue. Fulvic acid then delivers these living essences to the cells.

It has been reported by experts in India that there is a considerable amount of fake Shilajit in the Indian market place, and some of this is exported to other countries, including the United States. The fake Shilajit has a strong smell but no effect. Also, Shilajit that is not properly processed and filtered can contain unwanted substances. Unprocessed Shilajit is commonly distributed outside of India.

Dragon Herbs High Mountain Shilajit comes from very high altitude in the Himalayas and has been laboratory tested for authenticity and purity and to be certain that it contains no less than 40% fulvic acid.

Usage: Take 4 capsules per day, with other herbs, or as directed by a healthcare professional.