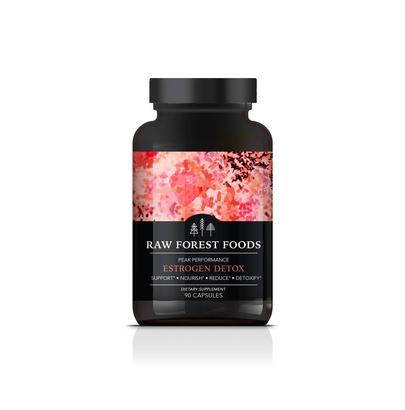 Who is Estrogen Detox For?

For our customers who are struggling with high levels of estrogen and low levels of testosterone, we are pleased to offer our exclusive Estrogen Detox formula, an expertly compounded estrogen detoxification protocol. We designed Estrogen Detox to work effectively for both men and women, as in our opinion men and women both suffer from increased estrogen loads and suffer the ill health effects from them.

As our environments are continually saturated with chemical xeno-estrogen (including BPA) and our diets bombarded with photo-estrogen, it is of increasingly importance to manage our estrogen load, minimizing exposure, and effectively detoxifying estrogen from the body. We have developed Estrogen Detox to safely and effectively cleanse the body of stored estrogen hormones and other estrogen like compounds.

What is estrogen toxicity (a.k.a estrogen dominance)?

There are many symptoms and conditions associated with estrogen toxicity/dominance and they affect both men and women–no one is exempt. Many of these conditions have been on a correlative rise along with the rise in use of certain (xeno-estrogenic) chemicals. For instance, the average man living today has drastically low testosterone levels compared to men living prior to the end of wwii (the introduction of estrogenic agricultural products and the introduction of plastic). Studies have shown that the average male testosterone level has dropped 1% per year since 1950. Cancers of the reproductive system in men and women have been on a corresponding rise.

Some of the widespread symptoms that people might be suffering from because of estrogen toxicity include:

Our environment is bombarded with xeno-estrogen. All of us have been exposed to xeno-estrogen, and once exposed it is stored in the body.

Mainly, these estrogens are chemicals found in our environment which act like estrogen in the body, and build up in our fat stores where their effects compound. Some of the major sources of xeno-estrogen comes from the storage contains for food, bottled water, body care products, and pesticides. If you are like me, i used to religiously drink water from a nalgene bottle, which is full of bpa (now removed from many nalgene bottles)—a potent and aggressive xeno-estrogen. I even used to make tea in my nalgene bottle, leaching even more bpa out of the plastic. Maybe you never used this type of water bottle, but if you ever consume drinks out of plastic bottles, or drinks or foods from (tin and aluminum) cans, you have been exposed to BPA.

Many body care products, including shampoo and conditioners, contain parabens. The vast majority of shampoos and conditioners, even at the health food store, contain parabens, another xeno-estrogen. The majority of lotions have parabens in them too. Up to 70% of what goes on your skin becomes absorbed by the body, so any estrogen compounds that go on your skin become endocrine disruptors once they are absorbed. Furthermore, sunscreen, in addition to containing parabens, contains 4-Methylbenzylidene camphor, another xeno-estrogen.

Increasingly, diet is a major source of outside, or exogenous, estrogen. Soy is found in almost every processed food, and almost all prepared food is cooked in vegetable oil, of which a major ingredient is soy. Soy contains phyto-estrogens, which are plant estrogens. These have a widely understood estrogenic effect in the body, and they are stored—like all estrogen—in adipose (fat) tissue. Eliminating soy and soy bean oil is an important step in regaining power against the proliferation of estrogenic compounds in our food and water.

Hops, which are a key ingredient in beer (as mandated by the German beer brewing purity laws), are full of potent estrogenic compounds. In fact, the term brewers droop refers to erectile dysfunction of brewers caused by the excessive exposure to hops. Antidotal reports of menstruation issues of women harvesting hops are widely accepted.

Affecting food and drinking water, many conventional agricultural chemicals are estrogen like compounds. These permeate foods and end up in the water supply. Mainstream and alternative medicine is beginning to recognize how wide-spread and ubiquitous xeno-estrogens are in the environment and in the body. The question that is unanswered is not if these chemicals are present or harmful, but how harmful they are and how long the effects will last.

Calcium D-Glucarate – 750mg. To promote estrogen detoxification and removal. Calcium D-glucarate is a natural substance that is found in apples, oranges, broccoli, spinach, and Brussels sprouts. To detox toxic estrogens your liver joins Calcium D-glucarate to glucuronic acid. Calcium D-glucarate can inhibit an enzyme produced by gut bacteria called beta-glucuronidase that can break this bond and allow the estrogen to be recirculated from the bowel. While Calcium D-glucarate is a naturally occurring compound, is it not present in adequate quantities to remove stored estrogen. 750 mgs of Calcium D-Glucarate is equivalent to the phytonutrient activity found in over 150 pounds of fresh fruit and vegetables. Chrysin – 225mg. To protect estrogen receptors from re-uptake of stored and released estrogen hormones. Chrysin (5,7-dihydroxy flavone) extract. Chrysin is an extract from the Passion Flower plant, and contains anti-aromatase and antioxidant flavons. Chrysin is the main active ingredient in Passion Flower, used traditionally to enhance potency and virility. In terms of removing estrogen, Chrysin is considered the most potent plant estrogen metabolizing compound in nature. Dim (3,3′-diindolylmethane) – 100mg. To promotes estrogen detoxification and removal. Dim (diindolylmethane). Dim is a naturally occurring compound that is found in cruciferous vegetables, but in inadequate quantities as to be useful for removing stored estrogen. Dim is well known for its beneficial effects on shifting estrogen metabolism away from the harmful 16 hydroxy estrogens metabolites. Additionally, dim has been shown to be protective against certain cancer, and high levels of estrogen are linked with breast and reproductive cancers in men and women. Milk Thistle Seed Extract (80% silymarin) – 100mg. To protect and heal the liver, and to promote phase I and phase II liver detoxification. Silymarin, the active compound found in the seeds of the herb milk thistle, is the powerhouse for the liver. It both protects the liver from damage (even acute poisoning) and it also helps rebuild diseased liver tissue and cells. There are over 120 published studies listed in PubMed on the effects of milk thistle on the liver. Clinicians use milk thistle to completely reverse cirrhosis of the liver in 6 months.

Silymarin supports both Phase I and Phase II detoxification in the liver. Because all hormones are processed by the liver, protecting and supporting the liver during an estrogen detoxification protocol is paramount. A common cause of estrogen toxicity in men and women is a diseased or a congested liver. If the liver cannot safely detoxify hormones, including estrogen, and other toxins, it processes them to be stored in adipose (fat) tissue. Chamomile extract (1% apigenin) – 50mg. To protects the body from stored and released estrogens. Apigenine (5,7-dyhydroxy flavones) Extract. Apigenine is an extract isolated from chamomile flowers and is a potent estrogen metabolizing compound. Apigenine has anti-aromatase, antioxidant, anti-cancerous properties. Combined with trans-resveratrol, Apigenine has been shown to antagonize and destroy estrogen related cancer. We encourage people to take a high quality trans-resveratrol along with Estrogen Detox.

Sulforaphane (from Brassica oleracea italica) – 250mcg. Supports estrogen detoxification and metabolism. Sulforaphane Extract. Like DIM, Sulforaphane is a naturally occurring extract from cruciferous vegetables (exclusively broccoli). Sulforaphane is a potent inducer of phase II liver detoxification enzymes. The phase II detoxification enzymes are responsible for eliminating harmful toxins and carcinogens from the body. These powerful enzymes safely metabolize the released estrogen caused by the other compounds included in EstrogenDetox. With Sylimarin, sulforaphane ensures the released estrogen hormones are eliminated from the body. Sulforaphane has been shown in the laboratory to inhibit the proliferation of breast cancer cells and to reduce their expression of the estrogen receptor. Additionally, research has shown that sulforaphane acts directly to inhibit cancer cell growth and to initiate apoptosis (cell death) of cancer cells through a variety of mechanisms.