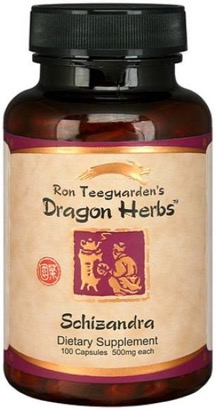 Schizandra is a famous tonic historically consumed by Chinese royalty and by Taoist masters. It is one of the few herbs that contains all three treasures.
$27.55
Out of stock

The Quintessence of Tonic Herbs

Schizandra fruit, from the plant Schisandra chinensis, is "the herb that does it all." It develops and protects the primary energies of life. Schizandra, known as the "quintessence of Chinese tonic herbs," supports vitality and beauty when used regularly for some time. It is said to promote beautiful skin. Schizandra is said to help purify the blood, support the mind, help maintain a strong memory, and help maintain sexual energy and sexual functions in both men and women.

The very name of Schizandra in Chinese, Wu Wei Zi, tells us a great deal about the qualities of this herb. Wu Wei Zi means "Fruit of Five Flavors." Due to the fact that Schizandra possesses all five of the classical "tastes" (sour, bitter, sweet, spicy and salty) and thus possesses the essence of all five of the elementtal energies (wood, fire, earth, metal and water), Schizandra is respected as a health-providing tonic in the same class with Ginseng and Reishi Mushroom.

Generally, the five flavors also have different functions on the human body.

As to the Yin/Yang nature of the 5 flavors, sweetness and spiciness are yang while sourness, saltiness and bitterness are yin. It is therefore very important that in our daily diet, we consume all five flavors in a balanced fashion. One should not skip any flavor. Otherwise, imbalances will arise and certain organs may not be nourished properly. All herbs contain at least one of the five flavors. Remarkably, Schizandra fruit contains all five flavors.

Schizandra has been used since the dawn of Chinese civilization as a tonic herb. From the beginning it has been revered, and remains one of the elite herbs of the Chinese system of herbalism. It was first written about in Shen Nong's Pharmacopoeia (between first and second century A.D.) where it was listed as a Superior herb.

The Taoists especially revered Schizandra. This is because Schizandra tonifies all 3 treasures, enters all 12 meridians and nurtures all 5 elements. Though Schizandra is believed to benefit all the functions of the body, it has traditionally been considered to have the most influence on the Kidney, Lung and Liver functions.

Schizandra is widely used to beautify the skin and to protect the skin from the damaging effects of the sun and wind. Due to the astringent quality of Schizandra, the skin tends to hold its moisture and becomes full and beautiful. It has always been very popular with the wealthy men and women of China, especially the women of the imperial court, because of its youth preserving and rejuvenating effects. It is said that those who use Schizandra consistently will remain youthful in both appearance and physiology. I have seen the benefits of this herb with my own eyes hundreds of times in my life. People who start taking Schizandra regularly all change for the better. Their skin virtually glows and becomes clear and fine after several months.

With Double-Direction Regulation on The Central Nervous System

This herb is considered to be one of the premium mind tonics of herbalism. It is used to sharpen concentration, improve memory and increase alertness. Yet, unlike caffeine-like stimulants, Schizandra does not produce nervousness. In fact, some people consider Schizandra mildly "calming" while producing wakefulness and improved focus. The ability of the dried fruit to increase mental and physical activity in humans was reported in numerous studies conducted in the 1950s. It has been demonstrated that human intellectual activity can be enhanced and work efficiency increased by consuming Schizandra. Various tests have shown that moderate therapeutic doses of Schizandra can improve various activities requiring concentration, fine coordination, sensitivity and endurance. The tests in humans confirming Schizandra's efficacy in these areas range from threading needles to running marathons. Schizandra has been demonstrated in laboratory animals and in humans to have a stimulant action on the central nervous system. The herb works directly on the nervous tissue. Conversely and paradoxically, schizandra also promotes sound sleep when combined with yin herbs or sedative ("Shen stabilizing") herbs. Schizandra does not make people sleepy, but when it is time to sleep its action on the brain results in deeper, more satisfying sleep. Many studies now indicate that Schizandra actually has a powerful balancing, or regulating, action on the central nervous system. It can result in accurate and optimal balancing between the excitatory and inhibitory control functions of the cerebral cortex.

Schizandra stands along with Reishi as the primary liver cleansing agents used in tonic programs. Schizandra does not have the side effects that are associated with many of the "medicinal," or "inferior" liver cleansing herbs. Schizandra, especially alcohol extracts, are widely believed to protect the liver from damage due to poisons, as well as the by-products of living.

Phase I and Phase II of Detoxification

Schizandra has been shown to strengthen and protect the liver. It does this by detoxifying and rejuvenating this critical organ. There are two critical stages to the process of liver detoxification, known as Phase I and Phase II. In Phase I, a detoxifying agent goes into the liver and binds with toxins, releasing them from the liver and taking them into the bloodstream. Almost always, this newly bound toxic bundle is more toxic than the original toxin. This increased toxicity is known as bioactivation. It is obvious that this process can be dangerous. It's similar to the removal of asbestos from an old house. It needs to be safely removed from the walls and from the building without exposing anyone to it again. Re-exposure to old toxins in their new bioactivated form can make you sick – and much of this material will end up back in the liver again, or stored in other tissues.

During phase II of detoxification, the bioactivated toxins, which may be highly active, are safely cleared out of the body. This, of course, is the part we all want to happen in quick and efficient order. If the phase II process is weak, faulty or absent, all we've done is re-poison ourselves. Many substances can go into the liver and release old toxins into the bloodstream, but that is all they do, and as a result the person goes through an increased toxic period. The so-called cleansing crisis experienced by many people who go through various types of cleanses, is largely the result of bioactivated toxins wreaking havoc in the body. It is therefore very important that agents which boost phase I activity also have significant effects on enhancing the phase II clearance of the reactive intermediate. Schizandra appears to be very effective in boosting both Phase I detoxification and Phase II clearance of activated toxins. schizandra can reduce elevated sgpt (serum glutamate pyruvate transaminase) in patients with chronic hepatitis. Sgpt is an enzyme concentrated in the liver. It is a reliable marker of liver inflammation, often tested by doctors to evaluate liver damage. In a clinical study conducted in China, more than 5000 people suffering from various types of hepatitis were given Schizandra and the results were very good. The aggregate effective rate was 84-97.9%. Sgpt was normalized in about 75% of the cases.

Schizandra is said to increase the Water Qi in the Kidney. In particular, it is said to vastly increase the "water of the genital organs," referring to the sexual fluids. Schizandra is said to promote the production of semen. It is famous for its ability to relieve sexual fatigue and for increasing the sexual staying-power in men. It is thus an ingredient in the vast majority of men's sexual tonics in Asian herbalism. Women benefit from the same capacity to increase Water Qi of the Kidney. Schizandra is said to increase circulation and sensitivity in the female genitals. Many women claim increased genital warmth and sensation after using Schizandra for a period of time. The Chinese sexual classics claim that continuous use by a woman will increase the amount of "female elixir," a euphemism for vaginal secretions, during intercourse. On the other hand, Schizandra is used clinically to help counteract excessive vaginal discharge.

For both men and women, Schizandra is considered to have "aphrodisiac" qualities, especially when combined with other Kidney tonifying herbs like Lycium, Cistanche, Deer Antler, Epimedium, etc. Furthermore, Schizandra is one of the most important astringent herbs used in Chinese herbalism. An astringent herb conserves fluids, and in the case of Schizandra, it tends to contain sexual fluids until the appropriate time of release. Thus, consuming Schizandra for a period of time, one tends to build up sexual fluids. Schizandra is used in sexual formulations to prevent premature ejaculation and to help promote incredible endurance.

Schizandra is indeed the quintessence of tonic herbs. It belongs in everyone's home elixir bar.