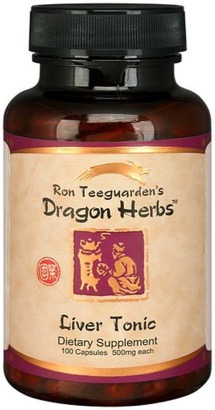 Tonifies Qi and Blood, builds defensive energy. Protects and regulates the Liver and its functions.
$34.20
Out of stock

Liver Tonic is a "super pill" formulation. It contains six of the greatest tonic herbs used in Chinese tonic herbalism. All of the herbs are considered to be anti-aging herbs. They are all completely safe and non-toxic. In fact, they help detoxify the Liver and the whole body while improving the condition of the tissues of the Liver and improving its functioning. Though these herbs have general effects on the body, they do have specific health promoting benefits directly on the Liver. This formula may be used as both a Liver tonic and a general tonic. It may be used throughout one's lifetime.

The Liver According to Chinese Traditional Health Theory

Of course, Dragon Herbs does not advocate using Liver Tonic to treat or mitigate any disease of the Liver. Liver Tonic is just what it is called -- a Liver tonic. To understand more fully what this means, one must understand how the Liver is believed to function according to the theories of Chinese herbalism.

The Liver, like the Kidney, is a complex organ system. Its functions include not only those of the liver as we know it physiologically in the West, but also includes a number of other organic structures and functions that might seem unrelated at first glance, but are in fact closely related functionally such as the control of the peripheral nervous system and of our vision.

The Liver stores and purifies blood. When we are active our blood circulates freely throughout our body, but when we are at rest, much of our blood returns to the liver and is stored there. While the blood is in the liver it is purified and changed. The liver plays the major role in our body of detoxifying the blood. Chemical toxins and metabolic by-products are separated from the blood in the liver and are either discharged through the bowels or stored in the liver where they cannot harm other tissues in the body. Of course, chronic consumption of toxic substances will severely damage the liver over time. Therefore a major part of strengthening the liver and making it healthy is detoxifying the liver itself of the toxins that have been stored there.

The Flow of Qi

The Liver smoothes and regulates the flow of Qi. The liver is responsible for the smooth flow of Qi throughout the body. It prevents stagnation and accumulation of Qi in the internal organs and meridians. If the liver is not functioning well in this respect, there is a tendency to bloating and congestion in the digestive tract. Other conditions that can arise from the inability of the liver to spread Qi are muscular tension, poor circulation, headaches, cold hands and feet, menstrual problems.

The Liver manifests as creativity, ambition, motivation and the "will to become." When the Liver is balanced, Qi flows smoothly and a person will naturally be able to express ideas creatively. Creativity itself is a manifestation of the Liver energy. Liver is associated with the Wood element, which is associated with expansive energy. Ambition and drive are also manifestations of the Liver energy. A person with a healthy Liver will have a well balanced urge to grow and develop, and will feel happily and energetically motivated. This is known in Chinese lexicon as the "will to become." The "will to become" is the will to live and to evolve. Lacking this "will to become," one will become depressed and lethargic. Depression and lethargy are clear signs that the Liver is not functioning properly.

The creative energy of the Liver manifests most fully at the early stage of new cycles, when a person's energy is fully charged and the future seems unlimited. The "honeymoon" of a relationship is just such a period that would be governed by the energies of the Liver.

Anger damages the Liver Blockage of the Liver energy usually results as a blockage of one's creativity, or the ability to express it. This inability to express one's creativity results in frustration. Since our society forces most people to suppress much of their natural creativity, most people build up Liver tension and frustration. If this frustration builds, eventually the energy turns to anger and rage. It is very difficult to suppress anger, which is an explosively powerful emotion, and eventually anger will manifest in one way or another. Anger is not always, or even usually, directed at the cause of the anger. People most often vent their anger in directions that will put up little resistance.

Anger should not be suppressed, but it should not be allowed to grow out of control either. Uncontrolled venting of one's anger will further damage the Liver. By regulating the Liver energy, it is actually possible to dissipate and dissolve old anger and to rise above the things that generate anger. It is very important to regulate the Liver and to dissolve old anger and resentment because carrying this emotional energy around constantly distorts one's entire life.

Anger often results in what is known as restrained Liver Qi, which will manifest as tightness in the ribs and cold hands and feet. The Liver does not allow the Qi to spread smoothly and thus the circulation to the hands and feet is insufficient.

When the Liver energy is functioning properly, the Qi is said to flow smoothly. This means that the energy flowing through the nervous system will flow smoothly. Blockage of this function, known as Qi stagnation, results in muscular tension. This is an extremely important syndrome. If the Liver function malfunctions, as when we are chronically frustrated or angry, or due to toxicity of the liver, this will physically manifestation as muscular tension. This tension will manifest wherever there is weakness. So, for example, if the lungs are out of balance, the tension will manifest along the Lung meridian and around the areas actually directly related to the lungs and its functional accessory tissues. The same would be true for any of the organs.

Muscular tension often occurs most severely in the regions specifically controlled by the Liver and the Liver meridian. For example, it is always said that "the Liver controls the neck." The main meridian of the Liver itself does not actually flow through the neck, but the Gall Bladder meridian does. The Gall Bladder is the Yang partner of the Liver. If the Liver is tense or "heated," the Gall Bladder will become more Yang resulting in neck tension. This in turn can cause chronic a acute neck problems, jaw problems and headaches. In fact, the great majority of headaches are so-called "Gall Bladder headaches," which are in reality caused by blockage or suppression of the Liver's ability to express itself freely and satisfactorily.

When the Liver fails to regulate the nervous system properly, the peripheral nervous system will become unruly. Spasms, cramps, twitching, dizziness, vertigo, convulsions, paralysis and hypertension will result. Headaches, for example, are generally caused by spasms of the blood vessels and other muscles of the head, neck, face and eye. This is a typical Liver symptom caused by an imbalance in the peripheral nervous system. Leg cramps, menstrual tension and cramps, back spasms, chronic shoulder tension, twitching, jaw tension (tempero-mandibular joint (TMJ) syndrome), muscular dystrophy, spastic colon and so on are all manifestations of Liver dysfunction.

These conditions that are caused by a lack of control of the peripheral nervous system are all known as internal wind conditions. Like the wind blowing, the energy shoots through the system chaotically and in bolts and waves. Drunkenness is a windy condition as well.

The Liver opens into the eye and controls vision. The eyes are a part of the peripheral nervous system, and are therefore controlled by the Liver. Both visual acuity and the condition of the eye itself are under the influence of the Liver. Acute inflammatory eye diseases are generally associated with excess of Liver fire. Chronic eye disorders such as blurred vision, dizziness, chronically dry eyes, and glaucoma are caused by blood and Yin deficiency of the Liver (often in conjunction with Yin Jing deficiency). Anger and toxic substances will cause the eyes to become red, as will a lack of sleep, which harms the blood and Yin of the Liver.

The Liver feeds the nails. The finger and toe nails are nourished by the Liver and provide an excellent indication of the condition of the Liver. Someone who has a healthy Liver function will have beautiful nails that are smooth, strong, and naturally shiny. If the Liver energy is depressed, the nails will be soft, thin, brittle, pale, dull and ridged. There will also be a tendency to develop inflammatory conditions around them or chronic fungal diseases.

The Liver energy concentrates in the genital organs. The Liver meridian runs through the genitalia of both men and women and thus are responsible for male erection and female arousal. Sexual drive is closely related to the Liver's primary drive to create (procreate) and to manifest the future. Poor erection or the inability to achieve arousal in a woman is the result of deficient Liver and Kidney energy.

The Liver benefits from calmness and smooth transitions. The Liver flourishes when transitions are smooth and general calm is maintained. Rapid, harsh change will damage the Liver. Change is a form of wind, and wind stimulates the Liver. If the wind is excessive, in other words the change is drastic, the Liver will not be able to make plans and have them carried out. The ability to make plans is an important function of the Liver, and the inability to do so can cause frustration and anger.

The Liver prefers to remain cool. The Liver is damaged by excessive heat, and therefore prefers to remain cool. Excessive heat conditions can cause general hypersensitivity, allergic reactions, and the full range of Liver symptoms. The natural tendency of the Liver is to overheat, in which case the heat rises, causing neck tension, hypertension, bloodshot or inflamed eyes, headaches, etc. This is called Liver fire rising. Or the heat can dry up the Liver Yin causing Liver Yin deficiency, which manifests as dizziness, depression, headache, irritability, blurred vision, nervous disorders, chronic eye problems and menstrual difficulties. Hypertension (high blood pressure), which falls into the pattern of these two syndromes (often a combination of both) is one of the primary killers of modern man because it predisposes a person to major cardiovascular accidents. It is treated by nurturing the Liver Yin and quelling excessive Liver fire.

If however, the heat combines with moisture, it can descend resulting in inflammatory conditions in the lower burner (the pelvic basin). Urinary tract infections, genital inflammation, vaginal discharge, and other such inflammatory conditions are known as Liver fire descending with dampness, or simply as damp heat of the lower burner and are treated by drying up the moisture and cooling the fire while balancing the Liver energy.

The Liver is the Seat of Happiness. Happiness is said to reside in, and emanate from the Liver. Happiness occurs when there is no frustration and anger, and in the Orient this is closely associated with the idea of modifying one's desires and ambition so that frustration and anger do not become hidden within the Liver and destroy our lives. A balanced attitude will result in a healthy Liver and a calm and happy life.

Who can use it? People who need to improve Liver functions. If you are on medication, seek advice from a physician.