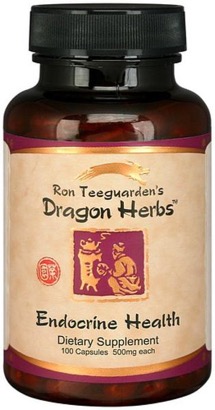 This formula is designed to help support the endocrine functions. It contains herbs known to support the endocrine system. Ginseng has been well established as a pituitary supporting herb in normal healthy individuals, thus it is the primary herb of the formula (the pituitary is the master endocrine gland). Ginseng also supports the functions of the spleen and pancreas. Most of the other herbs support the functions of the adrenal cortex and the gonads both in terms of tonifying and regulating functions. This formula tonifies and supports the entire endocrine system. Endocrine health is a dietary supplement composed exclusively of tonic herbs and is not for the treatment or prevention of any condition. It is a general tonic formulation with broad spectrum tonic actions. It is tonic to the Three Treasures (Jing, Qi and Shen). All herbs in this formulation are Di Tao, meaning they come from an authentic source. It is both a Yin tonic and a Yang tonic. For those wishing to use just one tonic formula, this would be an excellent choice.

Remember Ron Teeguarden's "First Rule of Tonic Herbalism,"summed up in a single word -- Compliance. If you don't take the herbs, they won't work."