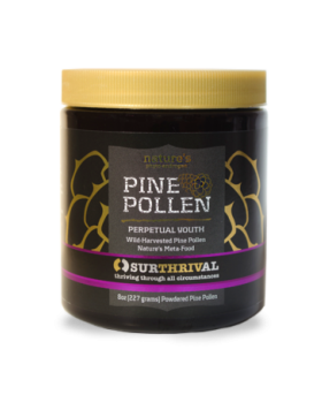 Introducing Pine Pollen Powder in an 8 ounce container! Retailing at $79.97, we are offering a highly competitive ounce per ounce price on a superior product.
$84.97

(NaturalNews) Raw pine pollen is the richest seedbed of testosterone derived from plants; since it is the male sperm of pine trees, it fosters plush growth in all living creatures, from trees and plants, to animals, to humans. Some experts claim that pine pollen is an ingredient in certain pharmaceuticals designed to treat low testosterone levels in both men and women.

Low testosterone in either gender may cause an increase in bad cholesterol levels, premature aging, tissue and bone loss, highs and lows in blood sugar levels, decreased levels of aerobic energy, weight gain, and sexual dysfunction. In men, low testosterone may increase their chances for developing prostate cancer due to the simultaneous increase in estradiol in the body.

The reasons for low testosterone in either sex are varied. For men, the largest contributing factors are nutritional intake and age. In their 30s and 40s, males typically experience andropause, a term coined in the late 1960s, meaning male menopause, or a decline in the synthesis of androgenic hormones, especially testosterone. Nutrition-related onset of lower testosterone levels in both men and women is typically due to an over consumption of foods with too much phyto-estrogen for the body.

Pine pollen can provide the opportunity for endocrine hormonal balance, i.e. the ratio of testosterone to estrogen, within humans, thus reversing the troubling effects associated with the imbalances that cause quality of life to decrease. This is done mainly through the phyto-androgens in pine pollen, including androstenedione, testosterone, dehydroepiandrosterone (DHEA), and androsterone. The conditions of diabetes, high cholesterol and fatigue have all been improved through the biological and nutritional mechanisms provided by routine consumption of pine pollen.

Raw, natural pine pollen is considered part of a nutritional program aimed at boosting energy and vitality during the aging process, and as such, consumers may experience an overhaul of their entire physiological system. Pine pollen is not a medicine, per se; however, some men use this nutrient-dense natural substance to successfully increase sperm count through more balanced hormones.

Outside of a stronger sexual libido due to more testosterone in men, pine pollen advocates tout skin rejuvenation, improved immune systems and other anti-aging benefits of continued supplementation. Some elements within pine pollen even work to detoxify cells by breaking down toxins in the body.

Many consumers wonder about endocrine shutdown with pine pollen. Endocrine shutdown occurs when the glands atrophy due to the fact that they are not being used. If the gland detects enough of a certain hormone, it will cease production, and eventually atrophy or shrink. This can happen with overuse of steroids or man-made hormones because these are molecularly identical to those that the body produces. Pine pollen's molecular structure, i.e. the androgens, is not identical to that of the body; however, it is similar enough to produce beneficial health effects, without the risk of gland cessation of production.

Pine pollen is easily absorbed by the body when taken in powder or tincture form. If the powder taste is not palatable, pine pollen can be mixed in drinks. The tincture form is considered more potent and uses organic grape alcohol as its liquid base.