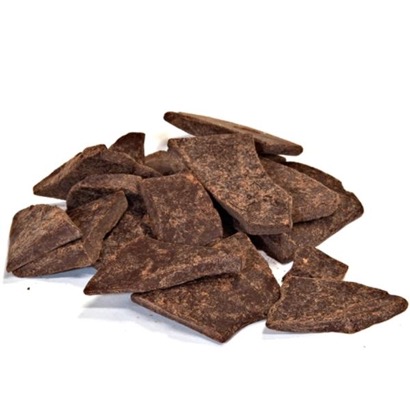 This organic truly raw cacao paste is made from the same cacao as our beans and nibs. They are all Organic Fair Trade Truly Raw Ecuadorian Heirloom "Cacao Nacional Arriba Fino de Aroma" Cacao. The flavor is nutty and it has a floral aroma. It has all been pressed at low temperatures and is truly raw! Cacao paste is essentially a 100% Dark Chocolate bar. With paste and butter, you can heat them up on your stove and make your own chocolate like the pro's!

Cacao is in the genus Theobroma and species Cacao. Other common names include Chocolate, Cacao, cacaoyer. The cacao bean is the seed of the fruit often thought of as a culinary nut. Cacao beans that are certified organic and raw, dried at low temperature can be difficult to find. Raw organic cacao is high quality cacao and can be used in raw food treats like smoothies, brownies and pies. Cacao ground into a coarse powder can be made into tea and used as a substitute for coffee or to drink at meals. Upon first trying it the taste was slightly bitter like the first time you eat one of those sundried Peruvian olives. Then you try it again and love it. Now it tastes better than the cooked chocolate. Any chocolate Goddess or God will love this treat.

Cacao contains a wide array of unique properties and minerals, including high levels of sulfur and magnesium. It may increase your focus and alertness and contains nutrients to keep you happy. Chocolate and cacao are often associated with love. All this is due to phenylethylamine contained in the cacao. Anandamide can be produced in the brain when we are feeling great, cacao makes anandamide stick around longer. The cacao tastes similar to, yet better than, unsweetened bakers chocolate. A sweetener is often used like raw organic agave nectar in conjunction with your raw treat ingredients.

Chocolate is made from the seeds of a plant called Theobroma cacao. The seeds are dried and roasted and then processed to form cocoa, the basic ingredient in chocolate and chocolate products. The use of cocoa for eating and drinking probably dates back several thousand years. The first evidence of cocoa use comes from cooking vessels containing cocoa residue. Scientists have determined these pots to be from at least 460 to 480 A.D. Columbus discovered cacao beans in America and sent samples back to King Ferdinand. However, the beans didn't become popular in Europe at this time. Several years later, Cortes discovered that the Mexican Aztecs enjoyed a type of bitter chocolate drink containing burned and ground cacao beans, maize, water, and spices. Cortes sent cacao beans and recipes back to King Charles V. The Spanish refined some of the recipes adding sugar and heating the ingredients to improve taste and texture. But because of the high cost of imported cacao, chocolate beverages were enjoyed mostly by the wealthy. By 1828, the cocoa press was developed. The press enabled workers to extract cocoa butter from the cacao bean. Ground roasted beans and sugar were added to the cocoa butter to produce dark "eating" (solid) chocolate. The first commercially prepared dark chocolate was produced in about 1847. Milk chocolate, made with the addition of dried milk solids, was developed by the Swiss in about 1876. Some brands of imported and domestic chocolate contain very refined chocolate and fillings and are very expensive. Still, less expensive varieties of chocolate are widely available -- making chocolate a very popular confection. The average American consumes nearly 11 pounds of chocolate each year. Men aged 12 to 19 consume the most amount of chocolate. Women aged 30 to 39 are the next largest group of chocolate consumers.

The genuine cacao tree is a small and handsome evergreen tree, growing in South America and the West Indies, from 12 to 25 feet high, and branching at the top; when cultivated it is not allowed to grow so high. The stem is erect, straight, 4 to 6 feet high; the wood light and white; the bark thin, somewhat smooth, and brownish. The seeds are numerous, compressed, 1 inch long, reddish-brown externally, dark-brown internally, and imbedded in a whitish, sweetish, buttery pulp.

This tree was extensively cultivated in Mexico, Central and South America for many years, indeed long before the discovery of America, and at one time formed the currency of the natives, who made an immense consumption of it in various ways. At present it is chiefly cultivated in Brazil, Costa Rica, Guayaquil, Ecuador, Venezuela, Peru, Guatemala, the island of Trinidad, and other West Indies Islands; also in Africa, Ceylon, Samoa, and other parts of the globe.

For some people, the lure of chocolate can be overwhelming. Cocoa contains certain chemicals and sensory properties that make the product very appealing. Cocoa contains theobromine (a chemical related to caffeine). The sugar in chocolate releases serotonin (a brain chemical related to a positive sense of well-being). The smooth, rich taste of chocolate (and sometimes the fillings) provides sensory pleasure to the taste buds. In addition, many people use chocolate as a reward and learn to associate the product with positive self-esteem. In spite of its physical properties, chocolate is not a physically addictive food. However, some people may find themselves psychologically addicted to chocolate. However, this may not be true for raw cacao.

Cacao seeds contain fat, usually around 40%, consisting of oil of cacao, cacao butter, theobromine (.9% to 2.35%), small quantities of theine (.05 to .37%), starch, ash and protein matter (6% to 17%). These percentages vary due to the decomposition of glucosid influenced by fermentation. Theobromine may act as a diuretic, and has a stimulant or exciting action not possessed by chocolate itself. Theobromine and theophylline, like caffeine, all found in this plant are used in modern medicine as antiasthmatic.