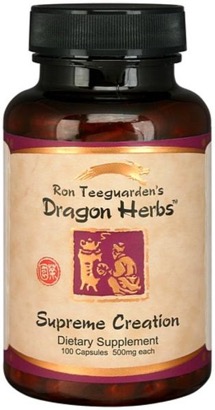 Supreme Creation is a top of the line herbal tonic formulation that features many of the most potent herbs known to mankind.
$52.25
Out of stock

About the Major Herbs Used in Supreme Creation

Deer Antler is widely believed in the Orient to strengthen all aspects of a person's life, and is considered to be an ultimate primal essence (Jing) tonic. It is said to be a warm Yang tonic, although it also contains Yin essence and is a major blood tonic. Extracts of Deer Antler have been found to strengthen the central nervous system and to support the heart functions in healthy people. Deer Antler is believed to support the mind and to enliven the Spirit (Shen). It is also widely used to support mental power. Deer Antler contains many natural minerals and other nutrients.

Deer Antler is the most precious and the most potent of the substances that fortify the Yang energy of the Kidney, Yang Jing. It is widely used in Asia to support adrenal and reproductive functions. It is universally believed in the Orient to build sexual strength and to increase virility.

Deer Antler is used to build blood and support healthy blood circulation. Deer Antler is tonic to the marrow, which produces blood, including white and red blood cells. Marrow degenerates as we age and Deer Antler is believed to support the bone housing of the marrow and the marrow itself, slowing down the process of aging. Deer Antler promotes healthy aging. This is a major aspect of Deer Antler's youth preserving ability.

Dragon Herbs deer are not killed for their antler. The soft antler of the deer is removed from the deer when it has grown just two or three points and is still covered by velvet (thus the term some people use, "antler velvet"). The deer grows new antlers that same season, which are not harvested. The tip of the antler is the most potent part because it contains the most active substances. Dragon Herbs uses "tips" to produce Great Creation. The tips are the last one inch of the antler, which contains the active constituents of the antler.

Asian Ginseng is one of the most famous and valued herbs used by mankind. Panax Ginseng, as it is officially known, is an energy tonic that regulates the human energy system. It has been shown to be stimulating and regulatory to both the central nervous system and to the endocrine system. It is the primary Qi tonic of Chinese tonic herbalism.

Ginseng helps a person to adapt to all kinds of life's typical stresses, and enhances endurance and resilience under these stressful conditions. It has thus been termed an "adaptogenic" substance by scientific researchers. Ginseng is also used to tonify digestive and respiratory functions. Ginseng contains many active ingredients, but the most important are the saponins called ginsenosides. Ginsenosides specifically improve adaptability and are believed to help build muscle and endurance. Therefore Ginseng is very popular with athletes.

Red Ginseng generally has a "warm" energy. Red Ginseng is more yang than White Ginseng. It is more of a power herb. Red Ginseng has been steamed, which turns the roots reddish brown. The steaming generates a range of new ginsenosides that give Red Ginseng its distinctively powerful actions. Dragon Herbs uses eight year old Ginseng roots that have been organically grown in Changbai Mountain, a pristine volcanic region of Manchuria. Most commercial Ginseng is collected after four or six years. Ginseng roots that have been left to mature in the mountain soil for eight years are far more potent and contain far more ginsenosides. This is the best cultivated Ginseng in the world. It is very powerful. The specific variety is considered to be of Korean origin, famous for its powerful Red Ginseng. The emperors of China, when they were in power, maintained Ginseng plantations in Changbai Mountain for their own personal use. The Ginseng used in this product is identical to that imperial Ginseng.

Because of its role in nurturing new life, Placenta is considered to be the most profound substance for replenishing Jing. It restores and helps maintain Yin and Yang Jing and blood on an ongoing basis. Placenta is also considered to be a major Qi tonic. It is the dominant ingredient in some of the greatest classical "restorative" formulations, where quick and powerful replenishment is required. Dragon Herbs is currently using Deer Placenta that is prepared by a high-technology nutraceutical factory in New Zealand from certified clean healthy Deer.

Eucommia Bark is a superb Yang Jing tonic, used to support the back (especially the lower back), skeleton, and joints). Eucommia Bark is believed to confer strength and flexibility to the ligaments and tendons. It is often used by martial artists, yoga practitioners, Qi Gong practitioners, and other athletes to strengthen the back, knees, and the entire body. Eucommia is widely used in China as a safe and effective sex tonic for men and women.

Cistanche is an awesome desert herb (Gobi Desert of Mongolia) that is used to strengthen the Yang energy of the body. Cistanche is famous in China as a sexual tonic that was used by Chinese royalty and by Qi Gong practitioners to build inner power. Cistanche is composed of both the root and the long stem that emerges in the boiling desert. It is a very hardy plant. Cistanche builds deep strength and is quite revitalizing when used continuously for a period of time. It is an excellent anti-aging herb. It is one of the three "herbal treasures" of the Heaven Mountains of Central Asia (Goji and Reishi mushroom being the other two). It was the main tonic herb of Genghis Khan, the infamous conqueror and emperor of China. He consumed it daily, the way other emperors consumed Ginseng daily. This formula contains both. Dragon Herbs uses premium grade wild Cistanche, collected in the Gobi Desert.

Morinda Root is an excellent Yang Jing tonic. It is used in superior tonic formulas for strengthening the body. It is widely used in primal Jing formulations, often as the main ingredient. Morinda is widely believed in China to support both physical and mental power. It is also considered to be beneficial to the heart by providing Qi to the heart and improving blood circulation. Morinda is excellent for martial artists because it makes you strong. Its name traditionally was "Strength Builder."

This tonic fruit is very widely used as an excellent Yin Jing and blood tonic. Regular consumption of Goji is traditionally believed to lead to a long and happy life. It is said that prolonged consumption of Goji will promote cheerfulness and vitality. Goji is also said to brighten the eyes and support vision. It is traditionally said that Goji strengthens the legs and enhances sexual function. Goji fruit contains polysaccharides that have been demonstrated to support the immune system. Goji provides B vitamins. Goji Berries are an important component of this imperial formulation. The Goji Berries are highly concentrated and provide Yin Essence that balances the Yang power herbs in this formula.

Schizandra is a famous tonic berry historically consumed by Chinese royalty and by Taoist masters. It is the only herb that contains all three Treasures, nurtures all five Elements (Water, Wood, Fire, Earth and Metal), and enters all twelve organ channels of the body. It is thus called "the quintessence of Chinese herbs." Schizandra is renowned as a beauty tonic and is considered to be a youth preserving herb because of its profound support of the skin. It has been used for centuries to make the skin soft, moist and radiant. It is also said to support the brain and energize the mind, and is believed in China to support memory. It is also an excellent sexual tonic for men and women alike. It is said to help support the production of the sexual fluids, increase sexual endurance and to strengthen the whole body. It is used in superior tonic formulations as an "astringent, which means that it improves staying power, which in turn improves sexual performance."

Prepared Rehmannia Root is said to be the "Kidney's own food." It is a Kidney tonic and thus is believed to be a longevity herb and is used in "anti-aging" formulations for longevity, and rejuvenation. It is also considered a premium blood tonic and is said to benefit sexual functions in men and women. Raw Rehmannia is not suitable as a tonic herb. The raw tubers must be steamed with a clear white wine to convert the chemistry of Rehmannia into a tonic herb. The steamed variety is said to be warm in nature. This steamed variety is known as Prepared Rehmannia. The premium grade Prepared Rehmannia used in Great Creation supports Yang functions by providing the Yin substance needed.

The sour fruit of the Cornelian Cherry, referred to as Cornus fruit, plays an important role in this superior tonic formulation, which is designed to build Jing. It is said to be "astringent," thereby locking energy into the system and preventing the energy from 'leaking" out. This is an important function for those practicing internal forms of Qi Gong or engaged in higher levels of Tantric-style sexual practice. It is a powerful Yin Jing tonic. It has a warm energy and is often considered aphrodisiac when combined with the appropriate herbs, such as those included in Great Creation.

Polygala Root is a powerful and very important tonic herb that harmonizes the Kidney and Heart Channels. It does this by stimulating the flow of Jing within the Central Channel that runs in front of the spine (the channel along which the Chakras are located). Polygala Root is known as the "Will Strengthener" because it profoundly supports human will power, a psychic power stored in the Kidneys and manifested by the Heart. It plays a key role in this formula as a mind tonic. It is also said to open up and support the feelings of love and passion when used in combination with sexual tonics such as Deer Antler, Red Ginseng, Cistanche and Eucommia. It helps men to reach a peak sexual state and then to control the process of ejaculation. It thus supports sexual mastery.

Dioscorea supports both the Yin and the Yang of the Kidneys, Lungs and Spleen in healthy individuals. Dioscorea supports the traditional Kidney functions as described in Chinese herbalism. Because the herb has a neutral "atmospheric energy," it is neither hot nor cold. It builds Spleen Qi, which supports digestion and metabolism. It is often combined with Ginseng to fortify Qi producing power.*

Who can use it? Those who wish to build Yang, specifically those in good health who wish to increase their creative and sexual capacity. This is a power formula. It would be best to use this with a complimentary Yin tonic formulation.