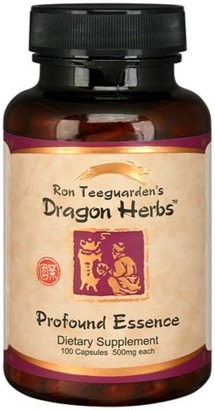 Profound Essence is a blend of Yin and Yang tonics designed to build the entire system up from the roots
$22.85
Out of stock

Profound Essence is a very powerful primal essence formulation. It is suitable for those who require maximum restoration of essence, especially if essence decline is the result of normal aging. Profound Essence tonifies Kidney essence (Yin and Yang), helps to build blood, and tonifies Qi.

This product differs from Primal Yin Replenisher because it contains a powerful array of Yang herbs and Qi tonics. It restores both yin and yang, and it restores qi, whereas primal yin replenisher restores yin jing.

The Herbs in Profound Essence

Yin Jing is depleted as a normal result of aging. As the Yin Jing becomes depleted, Yang is left uncontrolled Yin Jing is synonymous with life itself. It protects our youthfulness. A vicious cycle exists between aging and Yin Jing. As a person ages, they lose Yin Jing. When a person runs low on Yin Jing, they age more quickly. No one wants to run out of Jing. That is where Dendrobium Stem is powerful, effective, and quick. Dendrobium Stem is blended with other herbs like raw Rehmannia, Phellodendron and Anemarrhena. This combination will replenish fluids (Yin) and Kidney Yin (Yin essence). Furthermore, to protect the Jing, "astringent" herbs are important to prevent "leaking" of Jing during the process of restoration.

This formulation is made with superior grade herbs. Dendrobium, the primary herb is this formulation, in particular comes in many grades and varieties. It is one of the premier herbs of Chinese herbalism. There are at least one hundred varieties of Dendrobium available in the Chinese herbal trade, some much more effective than others, and some with entire different effects. Entire companies are devoted to collecting the many varieties that are available. Dendrobium is an endangered species in the wild, so Dragon Herbs does not use wild Dendrobium. Dragon Herbs sources super-premium cultivated Dendrobium for use in this product.

Eucommia Bark is a superb Yang Jing tonic, used to support the structure and functions of the skeleton and joints (especially the knees and ankles) in healthy and normally aging people, and subsequently to strengthen the back (especially the lower back, knees and ankles) in healthy and normally aging people. Eucommia is widely used in China as a safe and effective Yang tonic for men and women. Eucommia is believed to confer strength and flexibility to the ligaments and tendons. It is used to help strengthen the back, knees, and the entire body. Dipsacus and Cuscuta are also excellent Yang tonics that restore the primal power of the body. They are also astringent and help retain Jing so that it is not easily lost. Dragon Bone is a mineral that is both calming to the nerves and a substance that controls Yang energy.

Astragalus root and White Atractylodes are excellent Qi tonics that provide strength, support the immune system and help the body's natural ability to eliminate toxic fluids from the body that are the byproduct of normal living and normal aging. Dang Gui is the premier blood tonic of Chinese herbalism. Astragalus also supports blood production. White Peony Root helps build and clean the blood and beautify the skin. It has a relaxing effect on the muscles when combined with Licorice Root, as it is in this formula.

Raw Rehmannia confers strength to the Kidney system and plays an important role in harmonizing this formula.

Other Ingredients: Vegetarian capsules**, rice powder Usage: Take 3 capsules, 2 times per day or as directed by a healthcare professional