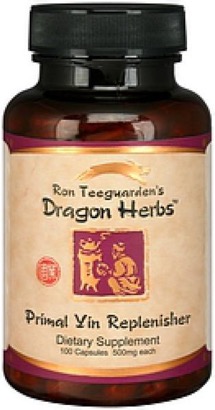 Primal Yin Replenisher is an extremely powerful Yin Jing tonic. It is for people who have severely depleted their Yin reserves and are in serious health condition as a result.
$25.65
Out of stock

Taking this formula is like recharging a drained battery.

Primal Yin Replenisher may be consumed continuously until energy is fully restored. Older people can continue to take this restorative formulation on an on-going basis.

Restorative formulations play a critical role in the rejuvenation of those people who have already exhausted themselves and have seriously drained their deepest energy reserves of Yin and Yang Jing. These formulas restore the deepest energies of the body. They generally aim deeper than rejuvenation formulas, which aim deep, but also aim to nourish all levels of energy. Those who have burned themselves out generally cannot recover with rest alone. They require a restorative formula. Taking these formulas is like recharging a drained or almost dead battery.

All of the following formulations are composed primarily of Kidney tonic herbs, sources of Yin Jing. This is because Yin is the fuel of life, and it is the depletion of Yin that results in chronic fatigue, or actually, chronic exhaustion.

The Herbs in Primal Yin Replenisher

Who can use it? For those who are deeply exhausted with heat symptoms (redness and/or inflammation). It is not suitable for those who feel generally chilled.