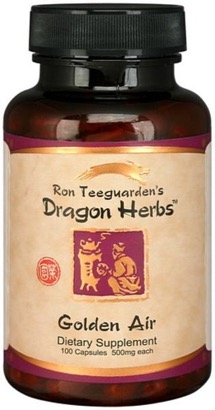 Golden Air is made with premium grade herbs. The highest grade Rhodiola, Codonopsis, Astragalus and Schizandra available in the world, and high grade American Ginseng, Asparagus and Ophiopogon assure that this is an effective formulation.
$21.85
Out of stock

Golden Air is an herbal formulation designed to support the respiratory system and its structures and functions. This formula also benefits the skin, helping it to become smooth, radiant and clear. This formula contains many powerful tonic herbs that build the general health, especially supporting the immune and Qi production systems. This is an excellent tonic.

The Herbs Used in Golden Air

Tibetan rhodiola is the most important lung supporting herb from Tibet. It supports respiratory power, endurance and oxygen assimilation. Codonopsis root is one of the most popular tonics in Asian tonic herbalism. It builds Qi and tonifies the Spleen/Pancreas function (digestion and assimilation). It is also a powerful and very popular Lung tonic. Though it has a warm energy, it is not drying to the Lungs, and in fact benefits the moisture of the Lungs without producing any kind of noxious fluids. It supports normal deep breathing respiratory function.

American ginseng is a potent Qi tonic that specifically moistens and supports the tissues and functions of the Lungs. It has a Yin nature that helps support healthy fluids in the Lungs. American Ginseng has a cool energy and is regarded as a pure Yin tonic. Astragalus root, schizandra berry and Licorice root are major tonic herbs used to support the functions of the immune system and to support the Lungs. Asparagus root is a Yin tonic herb often used to nourish and regulate normal fluids of the Lungs. Ophiopogon root is a close relative of Asparagus Root and is used in much the same way. It is a powerful Yin tonic that benefits the Lungs. Morus bark (root bark) is a cooling tonic herb for the Lungs. Aster warms the lungs. Plyatycodon is a Lung tonic.

This is a premium tonic formulation that may be consumed for as long as desired as a basic part of a tonic herbal program.

Traditional Function: Tonifies Qi and Yin, support the functions of the lungs

Who can use it? Anyone who desires to support functionality of their normal, healthy breathing