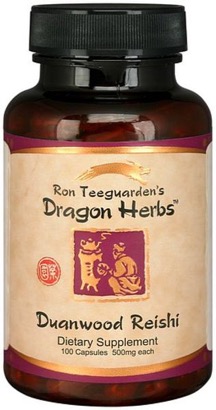 Reishi is indeed "the great protector," protecting us on every level---physically, immunologically, mentally, and spiritually.
$34.99
Out of stock

Reishi mushroom (Ganoderma lucidum) is the most revered herbal substance in Asia, ranking as the elite substance for the attainment of radiant health, longevity and spiritual attainment. It ranks in Asia with Ginseng, Deer Antler, Rhodiola, and Cordyceps as a pre-eminent tool in the attainment of radiant health. It has maintained that position for at least 3000 years, and its reputation and value are only increasing. Numerous legends provide a rich and extensive record of Reishi in Asian society.

Reishi has traditionally been used as an anti-aging herb, and has been used for many diseases and disorders as well. It has long been a favorite tonic food supplement by the Chinese Royal family and virtually any one who could obtain it. Reishi was particularly revered by the followers of the Taoist tradition as the "Elixir of Immortality." Taoists have continuously claimed that Reishi promotes calmness, centeredness, balance, inner awareness and inner strength. They have used it to improve meditative practices and to protect the body, mind and spirit so that the adept could attain both a long and healthy life and "spiritual immortality" (enlightenment). Due to its rarity in the past, the common people could rarely obtain a Reishi mushroom, and it was popularly revered as a greater treasure than any jewel.

Traditionally, Reishi is said to be a nourishing tonic, tonic to the three treasures (Jing, Qi and Shen). It is considered to be capable of building body resistance, and to be powerfully detoxifying to the cells and tissues of the body. Reishi is slightly sedative on an immediate basis but builds energy over time. Reishi is universally believed is Asia to prolong life and enhance intelligence and wisdom.

Since Reishi has been known to have many functions, it has been the subject of a great deal of research in recent years. It is absolutely safe, being non-toxic.

Reishi is a profound immune potentiator. It has been found to significantly improve the functioning of the immune system whether the immune system is deficient or excessive. In this sense, it is an immune "modulator" -- that is, it helps to modulate, or regulate, and fine-tune the immune system. Our immune system is a virtually miraculous network of activities designed over millions of years to protect us from viruses, bacteria, parasites, molds, dust, pollen and malignant cells. It is the responsibility of the immune system to detect the intrusion, or invasion, of these entities and to mount a defense in order to eliminate them. A healthy immune system is capable of resisting most such intruders and a very hardy system may be able to resist invasions that many other people's systems cannot. If the immune system is weakened or malfunctioning, the invading microbes can easily establish a foothold in our body and disease sets in. Antibiotics can often be used to stop the invasion at this time, but chronic use of antibiotics further weakens the immune response. Furthermore, antibiotics are useless against viruses, pollens and most parasites. They are certainly useless against malignant (cancerous) cells generated in our own bodies. It is much better to resist the invasion from within with a fully fortified immune system and not become ill in the first place. This is where herbs like Reishi are now attracting the attention of scientists and consumers alike.

Many chemical constituents play a role in Reishi's immune modulating capacity. The polysaccharide components in particular seems to play an important role in attacking cancerous cells, but not healthy ones, while simultaneously strengthening the body's overall immune functions. The polysaccharides appear to help the body attack microbial invaders such as viruses, bacteria and yeast.

But Reishi does not just "stimulate" the immune system but regulates it, and that is what makes Reishi so precious. If the immune system is excessive, as is the case with autoimmune diseases and allergies, Reishi can have significant positive influence. A group of chemicals known as ganoderic acids, present in Reishi, help fight auto-immune diseases such as allergies. Ganoderic acids inhibit histamine release, improve oxygen utilization and improve liver functions. Ganoderic acids are also potent antioxidant free-radical scavengers.

Still another component, Beta-1, 3-glucan, helps regulate and stabilize blood sugar levels. Not only that, but these same components have been shown to have powerful anti-tumor properties.

It has also been approved in Japan and China for the treatment of myasthenia gravis, a serious auto-immune disease. Besides that, it is commonly prescribed by MD's in Japan for chronic bronchitis, memory loss, insomnia, hyperlipidemia and a whole range of degenerative diseases of the elderly, including disorders associated with senility.

Other Benefits of Reishi

Reishi is widely used in Asia to improve the cardiovascular system. it helps lower hdl (the "bad" cholesterol) and reduce excess fatty acids. It has been found to prevent and treat hardening of the arteries, angina and shortness of breath associated with coronary heart disease.

Reishi is a superb anti-stress herb. Throughout history it has been used to bring balance into the lives of people who needed help in this department, and that means most everyone. Deep in antiquity, it was routinely used by mountain hermits, monks, Taoist adepts and spiritual seekers throughout Asia because it was believed to help calm the mind, ease tension, strengthen the nerves, strengthen memory, sharpen concentration, improve focus, build will power and, as a result, help build wisdom. That is why it was called the "Mushroom of Spiritual Potency" by these seekers. The people of Asia have never lost their faith in Reishi. They believe more than ever in Reishi's power to improve the quality of life by improving the inner life of a human being. All the scientific validation only explains the physical nature of Reishi, but it is the profound ability of Reishi to improve one's life on every plane that makes it so miraculous. Reishi is indeed calming and centering. Everyone who takes Reishi notices the peacefulness that seems to accompany its use. Many people are able to stop using chemical drugs. And Reishi seems to be cumulative, gradually strengthening the nerves and actually changing how we perceive life.

Reishi is a substance that builds health on all levels. It is the rarest of jewels in Nature. Life itself is based on the ability to adapt to the stresses, the attacks, the challenges that come our way every day. Reishi seems to provide an incredible resource of the full range of energies we need to meet these challenges. Reishi is indeed "the great protector," protecting us on every level---physically, immunologically, mentally, and spiritually. It helps us adapt to the world and provides additional power for us to achieve a superior level of life. When we are so protected and so provided for, we can achieve things that otherwise would be impossible. That is why Reishi has been called the "herb of good fortune."