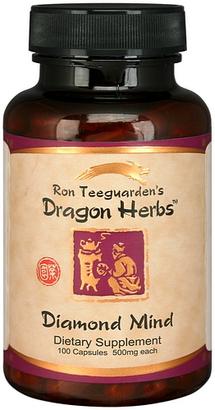 Diamond Mind is designed to strengthen and empower the mind. A cutting edge formulation perfectly suited to the mental strains of this new millennium.
$24.70
Out of stock

We live in an era when mental power is an absolute necessity, no matter what we are doing. A strong body is not enough to succeed in the modern world. The brain requires special nourishment to perform at its highest level. The herbs used in this formulation have been used for centuries by great thinkers and meditators to strengthen their minds.

Diamond Mind is designed to strengthen and empower the mind. Diamond Mind is a cutting edge formulation perfectly suited to the mental strains of this new millennium. The five herbs used in this formula have all been demonstrated to have powerful effects on the mind. It is a very safe formula. It is not a stimulant – it is a sophisticated tonic formulation designed to build long term mental power.

The Herbs in Diamond Mind

Himalayan Rhodiola is the primary ingredient in this cutting edge brain tonic. It has the action of supporting and strengthening the human body and intelligence, and prolonging life. It has double-direction adjusting effects on the nervous and endocrine systems. It is good for resisting fatigue, lack of oxygen, and it can improve a person's memory, power of concentration and work-efficiency.

Consumption of a small amount of Himalayan Rhodiola sacra extract significantly improves a person's capacity to absorb and utilize oxygen. This is a major key to the incredible benefits associated with this herb. When you consume Tibetan Rhodiola sacra, it is similar to inhaling pure oxygen.

This incredible herb was used by the Tibetan monks to enhance their spiritual power, the power of concentration and physical endurance. It has undoubtedly played a major role in the development of Tibetan culture. It is a superb herb to take before meditation, since it improves respiration and clears the mind and promotes focused mental states. Tibetan Rhodiola sacragained its name because it is considered a sacred herb in Tibet and Bhutan.

HimalayanRhodiola sacrais a superior tonic for those who work from behind a desk or at a computer terminal for long periods of time. It is a powerful brain tonic and alertness enhancer. People who consume Rhodiola sacrafind that they can work for much longer without losing their ability to concentrate and create. It is a superb herb for writers, executives, lawyers, doctors, musical performers, etc.

TibetanRhodiola sacrais especially beneficial to those who live under stressful conditions. It protects from the damaging effects of mental stress. It has been proven that Rhodiola sacra reduces the body's stress response, and thus protects against the physical side effects of chronic or acute stress as well. All this is due to its powerful adaptogenic activity. People stay focused and suffer far less from fatigue even under severe stress. It is the ideal herbal supplement for the modern world.

Standardized Ginkgo biloba (24% ginkgo flavone glycosides, 6% lactone terpenes) has been demonstrated to improve blood flow in the brain and to deliver increased oxygen to brain cells, thus improving cognition. Many people consume Ginkgo biloba to improve mental functioning, but it is much enhanced in this formulation due to the combination with the other tonic herbs. Each of the other herbs in this formula has been used for centuries to improve concentration, focus, memory, mental energy and mental endurance.

Eleuthero Root (Siberian Ginseng) has been demonstrated to improve concentration and memory. It aids in the recovery from hard exercise, as well as from extreme mental exertion. It is now routinely used by people required to engage in high stress, high energy-demanding activities such as high altitude flying, long-distance sailing, working in high or low temperature environments or in deep water. Russian cosmonauts have reportedly used Eleuthero. The use of the extract of this herb in these endeavors has been reported to increase physical strength, sharpen concentration, improve various parameters of mental power, increase visual acuity, and improve color vision and to promote healing power. Eleuthero is a very powerful adaptogenic agent. It is among the most famous and important adaptogenic herbs in the world. It helps expand the dimensions of work that one can perform, improving work capacity in both the short and long term.

Eleuthero increases respiratory power by improving the ability of the body to absorb and efficiently use oxygen. Eleuthero has been shown to improve mental alertness and work output. Numerous studies have demonstrated that Eleuthero has the ability to enhance sensorial perception, improving visual acuity and night vision, heightening auditory awareness, all while protecting the eyes and hearing apparatus from damage due to excess stimulation. In addition, considerable research and clinical evidence has demonstrated that Eleuthero is a powerful immune modulator. It helps to build resistance to infectious disease and can prevent auto immune reactions. Studies have shown that Eleuthero is especially useful in reducing the incidence of influenza in groups of people who consume it regularly.

All this adds up to one of the most useful and powerful health supplements known to mankind. In an era when workloads are intense, stress is ubiquitous and competition is the name of the game, Eleuthero is the perfect adaptogenic substance to make part of your daily regimen. Those who use high quality Eleuthero quickly discover that it is one of the great tools in natures herbal arsenal. It provides an abundance of both quick and long-term energy that results in an improved ability to handle stress, and further results in the improvement of one's capacities, both physically and mentally.

Schizandra Berry is considered to be one of the premium mind tonics of herbalism. It is used to sharpen concentration, improve memory and increase alertness. Yet, unlike caffeine-like stimulants, Schizandra does not produce nervousness. In fact, some people consider Schizandra mildly "calming" while producing wakefulness and improved focus. This herb develops the primary energies of life and is thus of great use to any one who consumes it. Schizandra generates vitality and improves skin quality when used regularly. It is a safe and powerful tonic herb. Schizandra is said to purify the blood and rejuvenate the Kidney energy. It is one of the greatest herbs on earth.

Polygonatum Sibilicum Root has traditionally been used to restore energy to the brain after prolonged mental exertion. Polygonatum is used as a Qi and Yin tonic and is said to have a specific benefit on the energy of the heart and brain. It is used in Shen and Jing tonics to nourish the brain and strengthen the mind. Polygonatum is believed to be restorative to mental vitality, especially when the mind has been overworked, over-stressed or is in a state of exhaustion. It is not a stimulant, and thus does not have instant effects. However, taken over a relatively short period of time (a week to a month), this herb is a potent mind tonic. Its effects are long lasting. And if consumed regularly, Polygonatum can prevent mental and emotional breakdown when you are experiencing heavy mental loads. Regular use sharpens memory, concentration, wakefulness and focus. It is a great herb for students, executives, airplane pilots, emergency room personnel, etc.

Diamond Mind is a profound brain tonic. But Diamond Mind is not just for the mind. It is a superb general tonic since the herbs improve circulation throughout the body and have many general adaptogenic benefits. This is a formula that promotes general well being, strengthens the immune system, and can even have a very positive benefit on one's sex life.

All of the herbs in this formulation have been demonstrated to be remarkably safe substances.

Who can use it? Anyone who wishes to improve the power of their mind