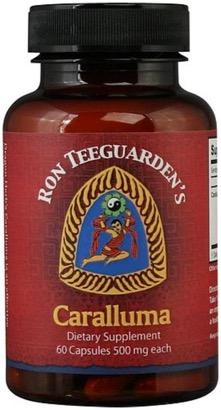 Many Americans struggle with their dietary habits, exercise programs and will power. As a result, the majority of Americans are now overweight.

Dragon Herbs Caralluma is an effective weight management herb for those who are overweight but who are not clinically obese. Dragon Herb's Caralluma has a double-action modus operandi, making it highly effective.

Caralluma inhibits this hunger sensory mechanism of the hypothalamus. The pregnane glycosides contained in Dragon Herb's Caralluma interfere with the signaling mechanism and create a signal on its own, apparently fooling the brain into thinking that the stomach is full, even when the person has not eaten.

The main reason why most weight loss programs fail is because of tiredness and dullness created by the loss of weight, which forces the person to go back to old eating habits, resulting in a rebounding weight gain. Caralluma, however, has been shown in controlled clinical trials to help participants to feel more energetic and gain lean muscle mass while losing fat.

Dragon Herb's Caralluma inhibits fat synthesis by blocking the formation of acetyl Co-Enzyme A and malonyl Co-Enzyme A, which are major building blocks of fat synthesis. Dragon Herb's Caralluma also increases burning of fat by the body. This makes more energy available to the body and makes the person more active and lively. The muscle cells burn more calories than fat cells. So when more energy is available to the body, muscle cells burn energy faster. Muscle cells are heavier than fat cells but they are also denser than fat cells. So they occupy less space and consequently the person appears more compact and trimmer than before using Caralluma.

Native populations of India consume locally growing plants and herbs as part of their diets. Edible succulents grow wild all over India and are part of the daily diets of several native populations. The Caralluma genus is one such genus of edible succulents, which includes several species that are widely consumed and known to be both safe and nutritious. Caralluma fimbriata has been studied for its effects on humans. This succulent vegetable is used in South India to enhance endurance and suppress appetite, especially by those performing labor. Indian tribesmen are known to chew chunks of Caralluma for energy and to suppress hunger when on a day's hunt. Often, tribesmen would pack only a bag of Caralluma fimbriata to sustain themselves during long journeys.

Wealth of India, the Indian Health Ministry's comprehensive compilation on herbs, lists Caralluma fimbriata as a vegetable and as a "famine food" – in other words, a wild plant that may be consumed for sustenance during a crop failure and general food shortage.

*Dragon Herb's Caralluma should be used as part of a complete program.

If you are consuming Dragon Herbs Caralluma as a dietary supplement for the purposes of weight management, and especially if you are planning to use it to help lose weight, it should be consumed as part of a broad health program, which would include sufficient exercise, reduced calorie intake, consumption of a well-balanced diet loaded with vegetables, fruits, antioxidants, sea vegetables, low-fat protein sources, whole grains, legumes, and tonic herbs, etc.