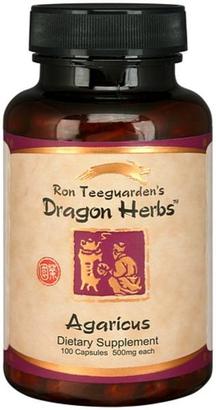 Agaricus blazei murill (most commonly known simply as Agaricus) is a mushroom that originated in the rain forests of Brazil. The mushroom thrives in certain tropical areas of China and the Chinese have become the premier growers of Agaricus to the world. Agaricus is traditionally known as "God's Mushroom" because of its near miraculous curative benefits to a wide range of disorders. People have used it to overcome numerous diseases and disorders relating to the immune system, cardiovascular system, digestion, weight management, diabetes, chronic and acute allergies, cataracts, hearing difficulties, stress syndrome, chronic fatigue, diarrhea, constipation, and disorders of the liver.

Several studies have documented this mushroom's ability to activate various components of the immune system.

The active constituents were identified as the polysaccharide-protein complexes called Beta-1,6-D-glucan and an almost identical chemical, Beta-1,3-D-glucan. These glucans have been found to be remarkable immune stimulants. They are potent macrophage activators. These glucan polysaccharides work through the "glucan receptor" on the surface of the immensely important immune cells known as macrophages. Macrophages are our first line of defense and play the pivotal role in our immune response to any attack by any intruder. Macrophages are the immune cells that recognize, engulf and destroy any organisms, cells, and substances that don't belong in the body, including viruses, bacteria, fungi, yeast, heavy metals, pollutants, bits of dead tissue, mutated cells, tumor cells, etc. They take on any challenge and further stimulate the immune system to respond.

Macrophages ignite intercellular communication by releasing chemical messengers called cytokines (interferon and interleukin). These cytokines are powerful proteins responsible for catalyzing and regulating several immune responses within the body. Agaricus stimulates the production of cytokines. Macrophages can travel from the site of their first contact with an intruder or toxin to the lymph system, where it communicates with T-cells, activating a specific immune response. Specific antibodies are then built to combat the specific intruder. Agaricus promotes this essential immune response. Beta-1,6-D-glucan and Beta-1,3-D-glucan have been shown to have inhibitory effects on abnormal cell growths. It has been proposed that Beta-1,6-D-glucan and Beta-1,3-D-glucan may stimulate cell lysing (destroying) action in specialized immune system cells.

Thus researchers have found the Agaricus polysaccharide fraction to have significant immune activating power. Agaricus mushroom has also been shown to have potent chemopreventive activity.

Agaricus in now being used clinically all over Asia for numerous diseases and disorders. However, it is also being consumed as a food and as a tonic herb, since Agaricus is a gentle, edible mushroom that has no side effects.

Agaricus mushroom is by far the richest natural source of Beta-1,6-D-glucan and Beta-1,3-D-glucan known to mankind. Other herbs that contain similar polysaccharides include Reishi mushroom, Astragalus root, Cordyceps mushroom, Polyporus mushroom and Shitake mushroom, and all are used around the world to boost immune functions.

By enhancing the body's natural defenses, this humble mushroom is a powerful protector. It should be consumed daily to maintain its powerful tonic effect on the immune system.

Agaricus is also available in the following Dragon Herbs products:

The four great "longevity mushrooms" combined into one extraordinary elixir. All four herbs are known for their powerful tonic and protective benefits. These are the four most powerful immune stimulating mushrooms in the world, and probably the most powerful immune stimulating herbs. These herbs are all very excellent tonic herbs which protect the body and help it to ward off invasion with utmost ferocity.

This is as potent an immune system protector as you can find. It contains the three strongest immune modulators known to Chinese herbalism, which is saying a lot. Agaricus is arguably the most potent immune modulator in the world. Reishi spores are 70 times more potent as an immune system modulator than Reishi mushrooms (and Reishi mushrooms are one of the strongest immune modulators in the world). Lycium polysaccharides have been demonstrated to have very potent immune potentiating action. This formula will build your immune system. Similar (but less potent) formulas based on Reishi spores are being sold in Hong Kong and Japan for over $500 for a month's supply.