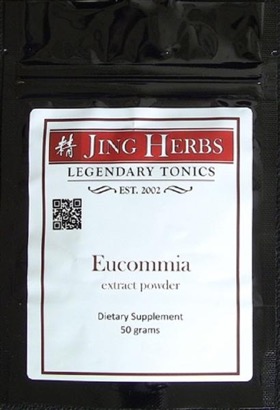 Eucommia bark is a favorite herb of athletes and those who are physically active as it increases physical energy and strengthens bones, tendons, and ligaments. According to Traditional Chinese Medicine (TCM), it tonifies both the Kidney and Liver which makes it one of the most effective herbs maintaining the integrity of the skeletal system. This is also a superb herb for the elderly in maintaining flexibility and stability.

One of the added benefits of Eucommia is its well documented mild action of reducing a state of high blood pressure in a safe and non-toxic way. In addition to its structural benefits, Eucommia has shown to be an effective anti-inflammatory and an aid in the mending of broken bone and torn tissue. This is also one of the herbs that is traditionally used for the threatened miscarriage or bleeding during pregnancy.

Since the Kidneys are considered to be the seat of willpower, consuming Eucommia will help strengthen resolve. Eucommia is a tonic herb of the first order and appropriate for both men and women.

Ideal for: Athletes, yogis, pregnant woman, and those recovering from injury.

Tcm functions: Tonifies the Liver and Kidneys, strengthens the sinews and bones.

Usage: 2 grams (approximately ½ tsp) two times per day. Mix with warm water and drink as a tea. Add to smoothies or shakes if desired. Best taken in the morning and afternoon.