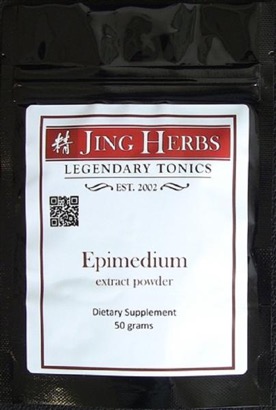 According to the "Classis of Materia Medica," Epimedium can help with "old-age confusion and middle- age forgetfulness." Other ancient classics have stated that Epimedium "augments the essential Qi, and is an herb of the arm and leg Yang brightness, Triple Burner, and Gate of Vitality. It is appropriate for those with insufficiency of true Yang."

Epimedium has a dry and yin consuming nature, so when taking this herbs on a regular basis, it is best taken with yin replenishing herbs like He shou wu, Lycium, and Rehmannia. Restore the Yin is also an appropriate formula to take in conjunction with Epimedium.

Ideal for: Anyone looking to increase sexual energy and physical energy.

Tcm functions: Tonifies the Kidneys and fortifies the Yang, warms the flow of Yang Qi.

Usage: 2 grams (approximately 1tsp.) two times per day. Mix with warm water and drink as a tea. Add to smoothies or shakes if desired.