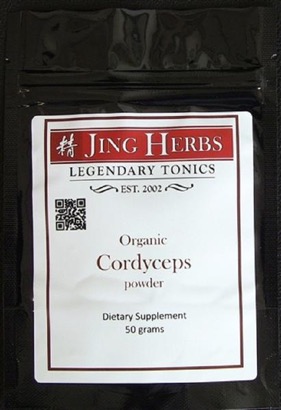 Cordyceps is one of the great herbs of Chinese herbalism. It is a balanced tonic herb that strengthens the Kidneys, tonifies Yang, nourishes Lung Yin, and strengthens Lung capacity. It also promotes healthy immune function, is considered a longevity tonic, and has an adaptogenic effect on the body.

As a Kidney Essence or "Jing" tonic, Cordyceps vitalizes the Yang energy in the body which is responsible for physical energy, sexual energy, mental and creative energy, and structural integrity of the skeletal system. As an athletic tonic, it vitalizes physical energy, increases lung function and endurance, and helps to build muscle.

Cordyceps is also widely regarded as a supreme immune system enhancer. It has the ability to help the body resist bacteria, viruses, and other external pathogens. It supports Lung Qi and increases Lung power for those who may have compromised Lung function.

Cordyceps is also considered an adaptogenic substance that helps to prevent aging and supports longevity and youthfulness. It is a rejuvenation tonic that is often used by those who are recovering from illness, extended periods of stress, and general feelings of fatigue.

Tcm functions: Augments the Kidneys and tonifies the Yang. Augment the Lung Yin.

Usage: 2 grams (approximately ½ tsp.) two times per day. Mix with warm water and drink as a tea. Add to smoothies or shakes if desired. Best taken in the morning and afternoon.