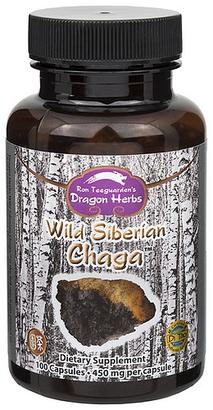 Chaga has long been used as a folk medicine due to its numerous biological functions such as antibacterial, anti-inflammatory and antioxidative activities.
$25.49
Out of stock

Chaga (Inonotus obliquus (persoon) Pilat) is a highly prized tonic mushroom (fungal mass). It is said to have many beneficial health functions, especially as an immune modulating tonic agent. It is found growing wild in old birch forests throughout the colder regions of the northern hemisphere, and has been well documented in Northern Asia and Northern Europe. Chaga has long been used in traditional Siberian, Korean, Chinese, north European and Scandinavian herbalism, especially Russian herbalism. Chaga has also been found in northern forests of America. The highest form or "superior grade" Chaga can only be found in locations with harsh wintery conditions where the temperature drops below minus (-) 40 degrees C. That is very cold. Premium Chaga is now being collected from the vast forests of Russian Siberia, where it grows abundantly. Ideal conditions exist in the pre-polar, northern, central and Arctic Urals as well as the Caucasus Mountains. This Chaga is referred to as "Siberian Chaga."

Dragon Herbs Chaga is collected wild, from remote, pristine black birch forests in the Kama River Basin of arctic Siberia, considered the premier source in the world for Chaga (Di Tao), and all Chaga mushrooms used to produce Dragon Herbs Wild Siberian Chaga are at least 20 years old at the time of collection. It has been well established that Chaga older than 20 years has both superior chemistry and superior benefit to human consumers. Siberian Chaga has been used for at least six hundred years in Russia, according to records, and probably much longer. It is considered to be a virtually miraculous herb by indigenous Siberians. There have been attempts at cultivating Chaga, but the results have so far been disappointing to pharmaceutical companies. Attempts for culturing this fungus axenically (under sterile conditions) have all resulted in a reduced production of bioactive metabolites. Wild Chaga is the way to go at this time.

You don't have to understand (or even read) all of the following science to appreciate the fact that there is currently a lot of research being conducted on Chaga.

Chaga mushroom (Inonotus obliquus) has long been used as a folk medicine due to its numerous biological functions such as antibacterial, anti-allergic, anti-inflammatory and antioxidative activities. Recently, a large amount of research has been, and continues to be done, on Inonotus obliquus (Chaga).

Russian and Scandinavian scientists had conducted most of the scientific research on this powerful herb in the last century. More recently however, Japanese, Korean and Chinese researchers are doing much of the scientific heavy lifting. Traditionally, Asian herbalists believed that Chaga "preserves youthfulness, promotes health, and promotes longevity." Because of its potent protective qualities and high degree of safety, it is designated as a "superior herb." It is categorized as a Qi tonic, like Reishi mushroom. It is also considered to be a superb Kidney tonic and cleanser. It is also used as a remedial herb every place that it is collected.

Chaga contains a multitude of active constituents and cofactors, many of which are currently being investigated for their potential health benefits.

Research has supported the folk evidence that Chaga possesses potent immune supporting actions. Chaga is a rich source of -glucans, especially 1-3--glucans, polysaccharides that are quintessential nutrients for the immune system. These polysaccharides have strong anti-inflammatory and immune balancing properties, enhancing the body's ability to produce natural killer (NK) cells to battle infections. These polysaccharides are considered to be the primary active constituents of Chaga, at least from an immunological perspective. And upon ingestion, a range of secondary metabolites are produced, many of which are highly active as potent immune modulators. Chaga polysaccharides effectively promote macrophage (white blood cell) activation through the mapk and nf-b signaling pathways, suggesting that chaga polysaccharides help regulate the immune response. The effectiveness of Chaga as an antiviral agent (as tested on West Nile virus and Herpes Simplex type 2 virus) has been shown to be dose dependent on the quantity of Chaga Polysaccharides present or their concentration. The antiviral results proved Chaga to be a very potent antiviral agent (rendering the viruses "completely inhibited." This is why Chaga Polysaccharides content is set at such a high level in Dragon Herbs Wild Siberian Chaga -- not less than 30%.

chaga is a very powerful antioxidant. Two natural antioxidants, named inonotusin a and b have been isolated from the methanolic (alcohol) extract of the outer layer of chaga, together with a molecule named dbl (3,4-dihydroxybenzaldehyde). More about dbl in a moment. Studies indicate that Chaga is a potent free radical scavenger, far stronger than any other popular dietary antioxidant, including blueberries, goji, resveratrol and acai. Chaga contains a range of important active constituents including the polysaccharides described above (at least 30% Chaga Polysaccharides by analysis in this product - these polysaccharides have powerful immunological and antioxidant activity), phenolic compounds (powerful antioxidant and antiviral compounds), and many lanostane triterpenoids (an important constituent of Chaga is inotodial).

Chaga produces massive amounts of high molecular weight phenolic pigments that have been categorized as melanins. This melanin "complex" is released to the surface of Chaga. Melanin is a potent antioxidant pigment that is present and needed throughout the human body, and has a wide range of health benefits. It has been demonstrated that this Chaga Melanin has strong genoprotective (DNA/gene protective) effects.

The antioxidant activity of the hot water extract (decoction) of Chaga has been precisely compared with those of other medicinal fungi (Agaricus blazei Mycelia, Ganoderma lucidum and Phellinus linteus) by Japanese researchers, showing that Chaga has the strongest antioxidant activity among the fungi examined in terms of both superoxide and hydroxyl radicals scavenging activities.